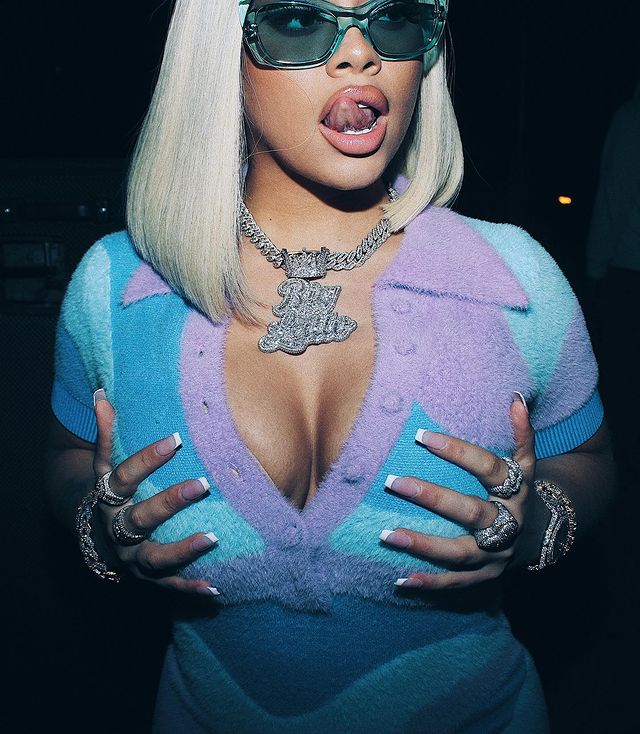 Miss Mulatto is an American rapper and singer, her real name is Alyssa Michelle Stephens, however, she is better known by the nicknames Latto, Big Latto, and Miss Mulatto. She rose to prominence after winning the first season of “The Rap Game,” a reality television show.

She took part in the program as Miss Mulatto when she was 16 years old and received a lot of praise for her great performances. She is also recognized for her 2019 hit Bitch from da Soul, which became her career’s breakthrough song. She has a number of hits under her belt and has garnered a lot of attention in the hip-hop community.

She’s one of the hottest female rappers on the scene right now, and she’s eager to take her career to the next level. So, in this article, we’ll discuss Miss Mulatto’s overall net worth, as well as her sources of income, career, biography, luxury lifestyle, and more.

Miss Mulatto (born December 22, 1998) as Alyssa Michelle Stephens in Columbus, Ohio. Her father, Shayne Pitts, is a businessman, and her mother, Misti Pitts, is a stay-at-home mom. When Alyssa was two years old, her parents packed their belongings and moved from Ohio to Atlanta, Georgia. She was raised in Clayton County, on Atlanta’s southside, and used to drag race as a kid.

At the same time, she became interested in music as a result of her father’s influence, and she began penning lyrics at the age of ten. Mulatto completed her high school education at Lovejoy High School in Lovejoy, California. Mulatto was her stage name at the time, and she wanted to pursue a career as a professional rapper and singer.

Mulatto began playing in local venues and at other fairs and festivals throughout the city. She had the opportunity to participate in the Lifetime reality TV series “The Rap Game” in 2016. That show catapulted her career to new heights. Mulatto was declared the show’s winner at the conclusion. The series’ producer, Jamaican Dupri, and his So So Def Records offered her a recording contract as a prize for winning.

But Mulatto turned the contract down claiming that the amount that they were offering her, wasn’t enough. She decided to become an independent artist and released her first single called No More Talking, in early 2016. That same year, she won the Youth Hip Hop/R&B Award at the Georgia Music Awards. Mulatto then released her first mixtape called Miss Mulatto, and in the following year she dropped her second mixtape Latto Let Em Know.

In 2016, the rapper released the smash tune Bitch from da Soul, which reached the 95th slot on the Billboard Hot 100 and became a major hit. The track was quickly certified Gold by the Recording Industry Association of America (RIAA). Mulatto earned her first record deal with RCA Records in March 2020, and her debut studio album, “Queen of Da Souf,” was released on August 21, 2020. The album was a big success, reaching number 44 on the Billboard Top 200.

The album included five new songs as well as the single “Sex Lies” ft the rapper, Lil Baby. Moreover, she collaborated with the rapper Gucci Mane for the single titled Muwop, for which she received a lot of appreciation. In early 2021, she revealed that she changed her nickname from Mulatto to Latto. In the following month, she was named the Global Push Artist of the Month by MTV. Mulatto has received several award nominations including the 2020 BET Hip Hop Awards for  Best New Hip Hop Artist.

Miss Mulatto is currently single and not dating anyone, but previously she was in a romantic connection with some famous artists. Mulatto started dating rapper Key Glock and they have posted many pictures together on social media.

Later she was linked with the rapper 21 Savage, they also went on a vacation together.

In 2015, Mulatto started dating rapper Bandit Gang Marco and they have been best friends since Latto was 12 years old. In 2017, Bandit and Mulatto broke up.

Miss Mulatto is currently one of the most influential Female American rappers and singer with an estimated net worth of $1 million US as of 2022. She is a rising female rapper in the music industry who rose to prominence after releasing popular singles. Her principal source of income is from the music industry, which includes album sales, song sales, and online platforms such as Spotify, which pays well. She also has a YouTube account with over a million subscribers, which she uses to promote her music.

Apart from being just a rapper, she also has been endorsing multiple brands in which Mulatto earns tons of amount. She has signed an endorsement deal with many popular brands including, Ambitious Girl, Shane Justin, Jewelry Unlimited, Inc., Chalice Chanel, Wkwėėn, PrettyLittleThing, Chanel, Geche, Calvin Klein, etc. In 2017, Mulatto launched her Georgia-based clothing store called Pittstop Clothing. Miss Mulato’s annual income is around $400,000.

How old is Mullato?

How much does Mullato make?

How rich is Mullato?

Miss Mulatto is currently of the most influential Female American rappers and singer with an estimated net worth of $1 million US as of 2022.

What is the real name is Miss Mullato?