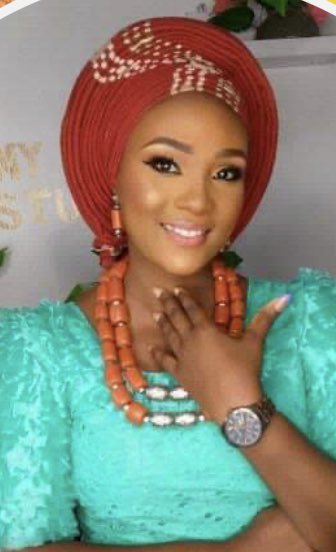 Few days after the devastating massacre that occurred in Owo, Ondo State, a lady who is also celebrating her birthday today shared how she escaped from the gory scene and was evaded as a victim.

The lady bearing Stephanie Ajibo Olitex on Facebook, took to the app to thank her stars for not being devoured by the terrorists.

She narrated that there were congregants inside the church when the shooting started.

Many sought for means to escape like jumping the fence.

The priest who was rumored to be kidnapped was said to have escaped from the murderous scene through the sacristy door.

The testifier expressed she tried reaching the door but it was locked before she got there and luckily she hid under a cupboard of the choristers with a baby in her hand.

She also attested to her choir master being shot right in her front by a masked gunman. Hopes for a recovery.

She concluded her narration by saying she saw deaths counting to a hundred and how she left the church through the fence that demarcates the building.

After all these, she thanked her stars for being alive with her baby to witness her birthday.

“We were inside the church when they started shooting from the outside. People at the back started running towards the altar. Some jumped fence, our priest escaped through the sacristy with the help of our cathchist. By the time I ran towards the Sacristy door, it was already locked by members who were able to reach there before me. I had to hide myself under the cupboard inside the choir room with the baby in my hand. He shot somebody right in front of me near the Sacristy door. He looked around, when he didn’t see anybody or sound, he went away. He was on mask, loaded with Ak 47.”

Note that the distance between the heavily loaded gunman and me was like kitchen to dinning. Our choir master who was hiding with us was shot on his chest before he ran into the room with us.”

“I pray he survives the bullet.They killed children, youths and elderly. We’ve recorded almost 100 death and still counting..I came out alive and escaped through the fence that demarcated our church from the Palace of Olowo of Owo Kingdom and ran to the palace for the fear of the unknown.The baby with me is safe, I’m also safe.Happy birthday to me.” 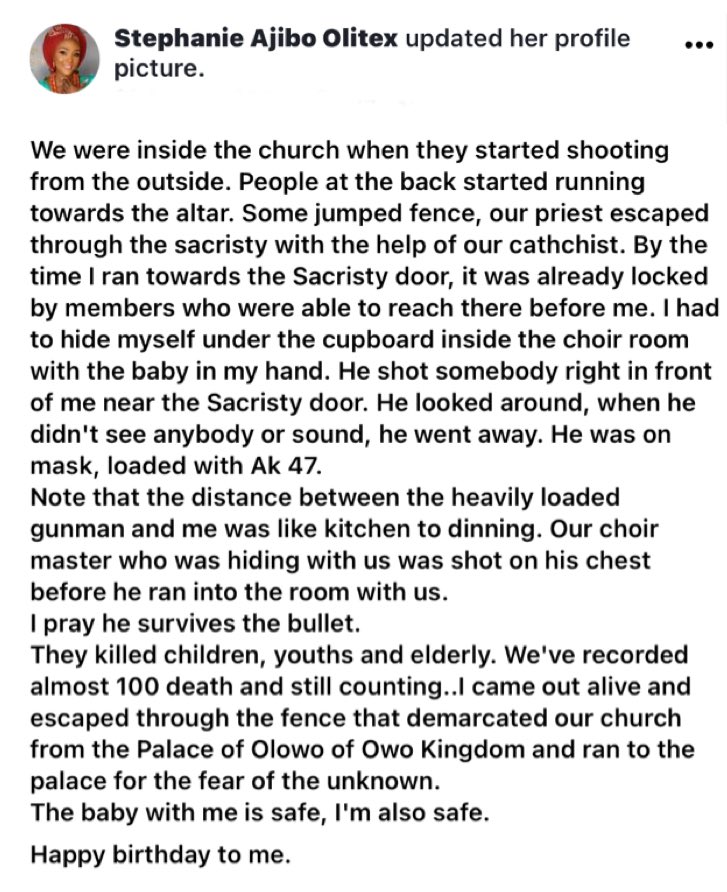