Home News What we have seen in America is a child’s play to what... 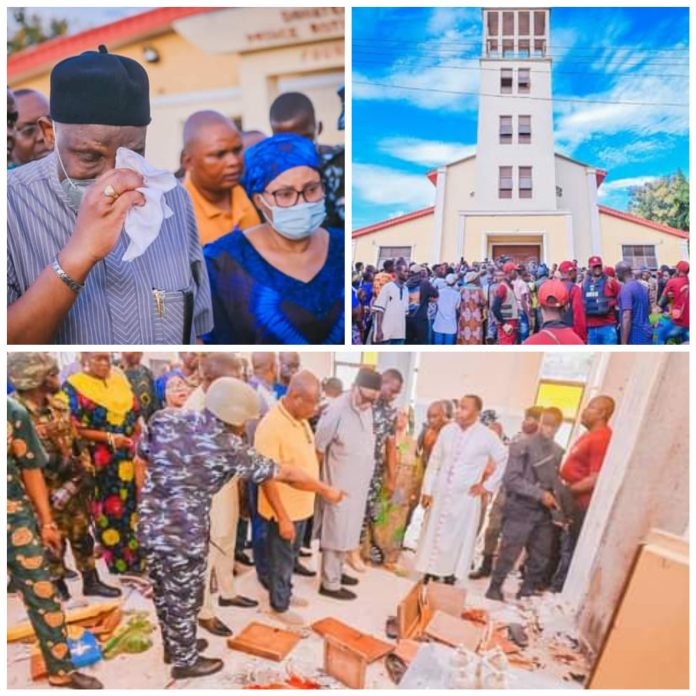 The Governor of Ondo State, Rotimi Akeredolu, reacting to the attack on St Francis Church in Owo, Ondo State by gunmen has stated the recent attack in the United States is a child’s play compared to what has happened in Owo.

The Governor stated this in a statement released on Sunday night.

Akeredolu in his statement appealed to residents to maintain calm and let the security agencies take charge.

Akeredolu said, “I was at the scene of the terror attack on innocent worshipers at St. Francis Catholic Church in Owo, today. I also visited the hospitals where survivors of the attack are receiving medical attention. The attack was the most dastardly act that could happen in any society.

“What happened today is tragic. No better way to qualify it. It is the most tragic event! Horrific! What we have seen in America is a child’s play to what has happened here. That it happened in a church, to say the least, is most condemnable. I feel terribly sad.”

He extended condolences to those who lost their dear ones to the gruesome murder and appealed to residents to maintain calm and let the security agencies take charge.

“This is a great massacre. Our people in Ondo state will not let down their guard. This will not happen again. I have urged the Heads of Security agencies to take all necessary steps.

“They are taking this seriously. Please, don’t take laws into your hands. The perpetrators will never escape. We are after them. And I can assure you we will get them,” Akeredolu said.

The Vatican Press office reacting to the attack also stated that “The pope has learned of the attack on the church in Ondo, Nigeria and the deaths of dozens of worshippers, many children, during the celebration of Pentecost.

“While the details are being clarified, Pope Francis prays for the victims and the country, painfully affected at a time of celebration, and entrusts them both to the Lord so that he may send his spirit to console them.”