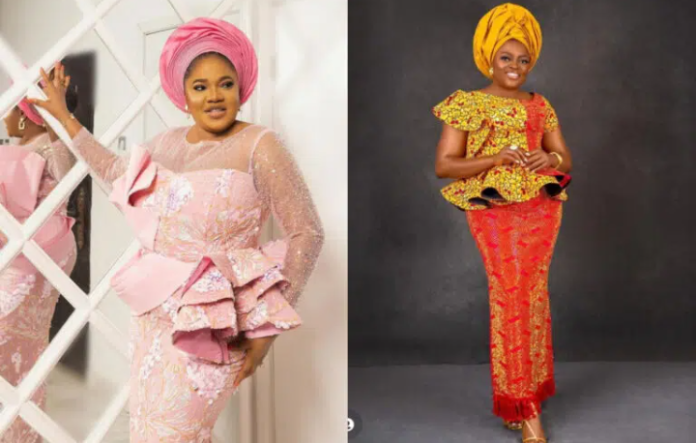 Nollywood actress, Toyin Abraham recently announced the launch of her new project, which has been met with mixed reactions.

Toyin took to IG to announce the launch of her kiddies YouTube channel which is solely for kids to learn and have fun.

Unfortunately, many weren’t having her new project as they noted how similar it is to Funke Akindele’s children’s program.

Before announcing their separation, Funke Akindele supported her husband, JJC Skillz on his kids’ program.

JJC Skillz has an educational channel for kids where he educates and entertains them on the different languages in Nigeria.

Sokidz, which is the name for his project, is an easy way for kids to learn children’s Songs & Nursery Rhymes in English and your language.

Noting the similarity between JJC Skillz’s kids’ program and Toyin Abraham’s new project, many tackled her for living in Funke Akindele’s footsteps.

Toyin wrote, “Hello fam! I am delighted to present to you my new YouTube channel created for our beautiful children to learn while having fun. It is called “TOYIN ABRAHAM Kiddies” where you will find all contents for our kids”.

Taking to her comment section, some of her followers faulted her for imitating Funke Akindele.

akanmu_adedamola: Why does this feel like a Funke Akindele initiative???

tolu_leke: You Sha dey chase Funke Akindele. You’re always doing everything she does.

Since 2020, there have been speculations that actors Funke Akindele and Toyin Abraham are not friends as they always shun each other on social media during birthdays, wedding anniversaries, premieres, and other celebrations.

The talented actresses who have not been on good terms began their acting careers in the Yoruba movie industry and have in recent times, made their mark on the silver screen. They are arguable, no pushovers when it comes to interpreting movie scripts to the letters but there is a pronounced rivalry between them for who is the best.

A blogger alleged that Funke Akindele has repeatedly been spitting Toyin Abraham in the presence of other Nollywood stars and had on one occasion threatened to stop working with a popular stylist if she dared style Toyin Abraham.

Their rivalry became pronounced after Toyin Abraham released a sequel to her one movie, The Ghost and The Tout on September 10, 2021, and interestingly, Funke Akindele who completely shunned Toyin’s movie poster also fixed the same date, September 10 for the release of her Omo Ghetto the Saga movie on Netflix, an act that divided their fans.