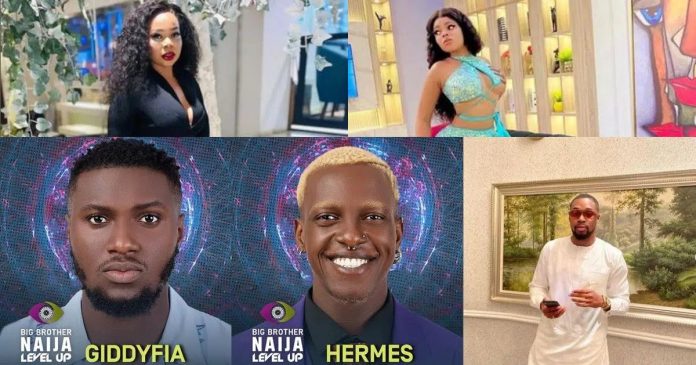 The seventh season of Big Brother Naija, dubbed Level Up, is currently gracing our screens and providing top-notch entertainment.

Many people have been brought into the house to compete for the top prize. Who will be that lucky person? Only time will tell.

Check out the previous group of housemates while I’m on this. There are currently 24 people living in Biggie’s home.

Whatever Giddyfia chooses to do, he makes sure to do it with passion. This 24-year-old engineer considers himself a hardworking team player with excellent interpersonal skills and lots of creative ideas. Diana is a 33-year-old Project Manager from Edo State. She was born in France, but now calls Abuja home. She is sociable, family-oriented, passionate about self-development, and loves learning about new cultures. Performance artist Hermes counts basketball, public speaking and American flag football as some of his interests. He has had the opportunity to perform some of his original dance pieces at reputable festivals in Lagos, Glasgow and Rotterdam, and has also appeared in music videos for afrobeats stars including Burna Boy, Davido and Ajebo Hustlers.

“Stripper by night and chef by day”. That’s just one of the many colourful phrases 22-year-old exotic dancer and chef, Chichi, uses to describe herself. She loves swimming, dancing and travelling, and considers herself “an unshakeably ambitious goal-getter”. Sheggz is a 26-year-old actor and professional footballer based in England. After sustaining an injury last year, he started acting again and recently scored a role in a production directed by Tola Odunsi.