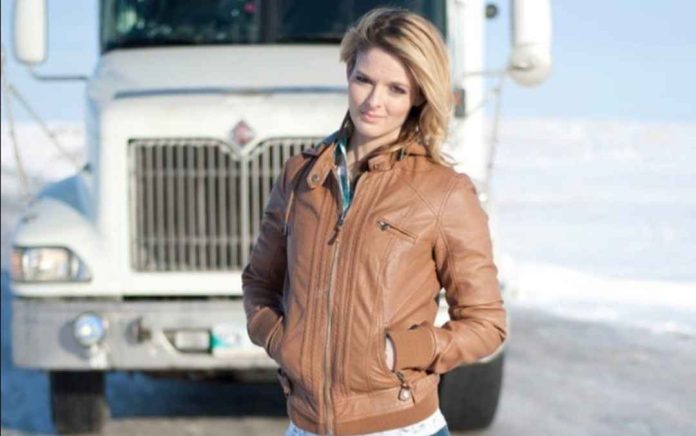 Lisa Kelly is a well-known American trucker and reality TV personality from Grand Rapids, Michigan, she is best recognized as not only a trucker but also a state freestyle motocross champion.

She rose to fame as a television personality by appearing in the hit reality series “Ice Road Truckers” on the History Channel as well as its spin-off “Ice Road Truckers: Deadliest Roads.” Before Maya Sieber and Stephanie “Steph” Custance appeared on the popular show, Kelly was the sole female truck driver.

The cast of Ice Road Truckers Lisa Kelly has had a love for trucks and driving and yet made a career that involves her passion. She amassed immense notoriety after she seized the chance to appear in Ice Road Truckers in 2009 while beginning her career as a Truck Driver. Kelly was fascinated by the wild experiences from a very early age, which led her to pursue her dream in ice road trucking.

From there she graduated from high school after which she decided to return to her hometown Grand Rapids for education in college where she enrolled at Cornerstone University. However, Lisa was a student at the University for only a one-semester and then decided to give up her education and return to her family.

After that, she started doing odd jobs including driving school buses, working at gas stations, and for a pizza delivery service. After that, Lisa started riding motocross, and her enthusiasm for the sport quickly earned her the title of state freestyle motocross champion.

However, her engagement was soon drawn to trucking so she has chosen to try herself out in that job. As she became very successful Lisa caught the attention of a haulage company called Carlisle Transportation, which soon came out with a job offer to become one of the company’s truck drivers in the Alaskan wilderness. Her main source of revenue was established with the acceptance of the job.

In addition to her new position, Lisa received a chance from the History channel to appear in their well-known reality television series “Ice Road Truckers,” where she will reportedly be the only female truck driver, at least in the far north.

In 2009 Lisa became a celebrity after making her debut appearance in the third season of the show and began starring in a couple of next seasons. That was the turning point of her career and that also increased her popularity all around the world. Lisa Kelly’s net worth was also massively increased after being cast on the Ice Road Truckers.

At that time, she worked as a truck driver in India and afterward in Peru and Bolivia. She also participated in reality television programs with Rick Yemm, Dave Redmon, and Alex Debogorski, such as Ice Road Truckers: Deadliest Roads. After all of this, she was given the opportunity to sign a contract to return for season 6 of the program, but she turned it down and took a year off.

Later Lisa decide to return to the show in season seven and season nine and worked with Darrell Ward’s new company before he passed away in the following season. The final season 11 of the Ice Road Truckers was aired later in which Lisa made her appearance as well.

Lisa is still traveling through Alaska and Canada even though the show has come to an end. She joined social media as well, where she frequently posts updates on her life. Lisa has a fresh start in 2022 thanks to the acquisition of a brand-new truck from Peterbilt and the beginning of new employment.

She moved to Fairbanks and set up a new shop for herself which is more than a workplace. Besides driving now Lisa is a pro mechanic and has been teaching all her trucking experiences online.

In 2008, Lisa Kelly married Traves Kelly. Traves is a dirt bike rider and the couple’s current residence is in Wasilla, Alaska. In her spare time, she enjoys snowboarding and horseback riding and is sometimes active on her official Twitter and Facebook accounts.

Lisa Kelly is a well-known American trucker and reality TV personality from Grand Rapids, Michigan, with an estimated net worth of $500,000 as of 2022.

Lisa has been driving for more than a decade and she has accumulated a good sum of money for herself. It is very hard to earn a $1 million net worth for a truck driver. She also bagged a nice bank balance from her appearance on the show Ice Road Truckers.

Not to mansion the trucker also earns handsome sums through sponsors and endorsements. Besides Lisa Kelly is also active on YouTube which means she makes some quick bucks from her channel. After all the inspiring, and extraordinary Lisa is living her life to the fullest. Lisa Kelly’s annual income is more than $100,000.

How much is the worth of Lisa Kelly?

Lisa Kelly is a well-known American trucker and reality TV personality from Grand Rapids, Michigan, with an estimated net worth of $500,000 as of 2022.

How much money does Lisa Kelly make annually?

How old is Lisa Kelly?

Lisa Kelly was born on the 8th of December 1980 in Grand Rapids, Michigan, she is 41 years old.