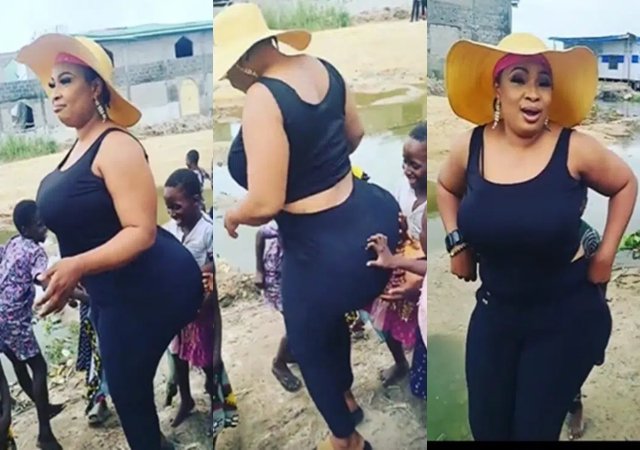 Laide Bakare, a Nollywood actress, has come under fire from a makeup artist for letting young kids touch her stuffed-up butt.

The actress posted a video on Instagram of herself stuffing her butt to make it look bigger and funnier. This attracted the attention of some young children, who eagerly pursued the actress to feel the stuffed butt.

Bakare, who loved the youngsters’ attention, danced about to amuse them while they played with her butt.

The video stirred up negative reactions from displeased fans. One of which was from a makeup artist, named Esther Badmus who called her out for exposing the kids sexually.

“EXPOSING KIDS TO SEXUALITY SUCH THAT THEY SEE IT AS A NORM AND GO BACK HOME TO BE HITTING THE BUTTOCKS OF THEIR MATES”, ESTHER WROTE.

Reacting the actress who wasted no time in slamming her saying;

‘@GBEMMYGLAM_MUA YOUR LIFE IS OBVIOUSLY A MISERABLE ONE. I WON’T BLOCK YOU NOW. YOU ARE CLEARLY NOT A FAN. ANYWAY. KEEP ENJOYING YOURSELF ON MY VERY UNIQUE AND INTERESTING PAGE.’, BAKARE WROTE.