Home News “Unknown Men Are Threatening Me Because I Made Painting Of Peter Obi”,... 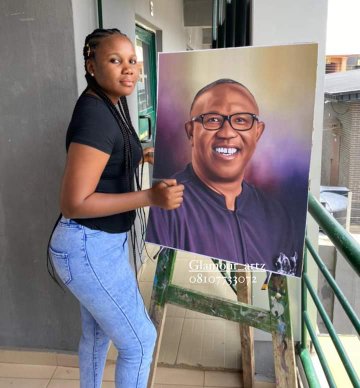 A Nigerian female artist, Chiamaka Mirabel has cried out after unknown men threatened him because he made a portrait of the presidential candidate of Labour Party, Peter Obi.

Chiamaka said she has received more than 4 threat calls, with hidden number, telling her never to promote Peter obi again with my art work, and some threatening to deal with me.

“All inviting me to Abuja to come and present the art work that they have huge money for me, I refused because they are all fake. Now I’ve received more than 4 threat calls, with hidden number, Telling me never to promote Peter obi again with my art work, and some threatening to deal with me.”

“My question is how is my innocent painting becoming a thorn in thier flesh?

What is Nigeria turning Into.