Afrobeat singer and songwriter, Tiwa Savage must have embedded some of her talents in the life of  her adorable son, Jamil as he shows off his dance steps. 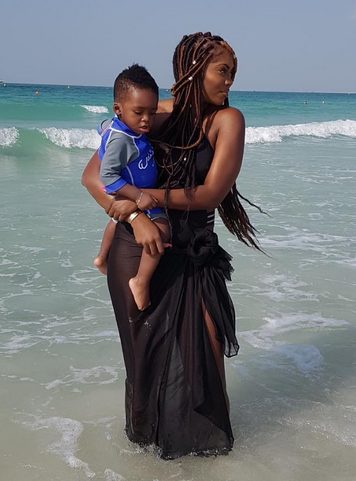 Tiwa Savage who is best known for her good voice as well as her amazing dance steps on stage and in her musical videos must have been giving little Jamil a dance lesson at home.

Recall that Tiwa Savage and Jamil stepped out in a stunning fashion statement yesterday however it was Jamil who made headlines at the event with his dance steps.

Jamil might be thinking of you having a great career as an artiste just like his mum, Tiwa Savage but will surely make a name for himself when it comes to dancing.

Tiwa Savage had her adorable son with her former manager and husband, Teebillz before things fell apart between both parties.

Teebillz has not been have the best of 2020 he would have hoped for as his client and former big brother naija housemate, Tacha decided to part ways with his management.

Tacha had joined Teebillz management after she was disqualified from the reality show as Teebillz promised to make her the next big star in the entertainment industry.

Both stars seems to have get the ball rolling before speculation that arising about the parties going their different ways as Tacha edited Teebillz management name from her profile on Instagram.

However, some days ago, Tacha came out to drop an official announcement about her disengagement with the team as she notes how glad she his to have been represented by them.

Teebillz on his part also took to his official Instagram Page to announce the news to his millions of fans on the social media platform.

According to reports, both stars were said to have end the contract after misunderstanding which was said to have escalated at an event.

“If you are the man for me, come and get me now”, BBNaija Tacha declares