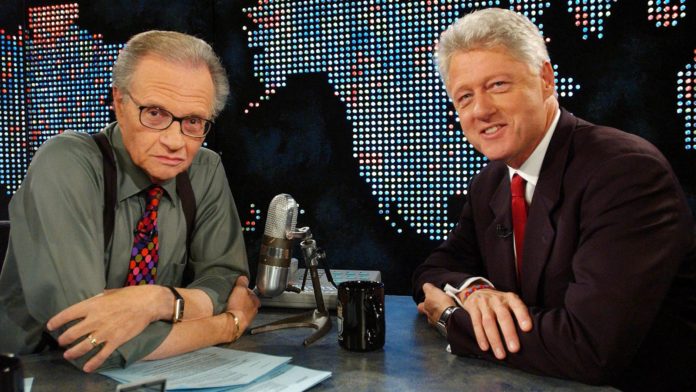 News of his passing way comes weeks after he tested Positive to coronavirus in December 2020.

According to sky news, King in over six decades had type 2 diabetes, suffered from lung cancer, angina and heart attacks in recent years.

King’s broadcasting fame began in the 1970s with his radio programme The Larry King Show, which he hosted on the network Mutual Broadcasting System.

He then went on to have his own television show, Larry King Live on CNN, between 1985 and 2010, where his guests included politicians, celebrities, sports stars and well-known conspiracy theorists.

Violette - July 22, 2021 0
Popular reality stars and celebrity couple, Khafi and Gedoni have announced that they are expecting their first child together. It would be recalled that Khafi...

Johnson Olumide - January 8, 2022 0
Queen of Afropop music, Tiwa Savage, 41 took to her social media page as she posted up some questions to her fans and admirers. She...

I’ll hunt down anyone who falsely accuse my sons of rape — Omoni Oboli...

Violette - December 30, 2020 0
Veteran Nigerian actress and filmmaker Omoni Oboli has issued a strong warning to everyone around the world as she noted that she'll hunt down...

#BBNaija: ‘All Mine’ – Bambam gushes over Teddy A

Violette - May 20, 2018 0
Former Big Brother Naija housemate Teddy A shared a photo on his Instagram page and guess who couldn’t stop gushing about it? Well it’s...