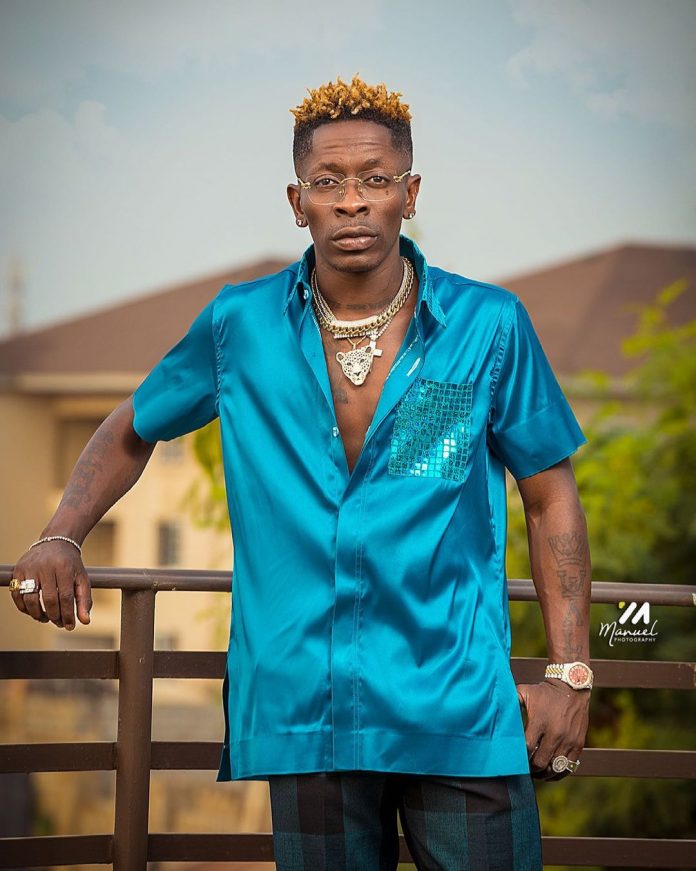 Shatta Wale is undoubtedly one of the top ten richest musicians in Ghana and his achievements have got fans wondering what is Shatta Wale Net Worth in 2022.

The talented singer has stamped his name among the legends in an industry filled with talented singers but that has not come without some sacrifice, hard work, and consistency.

In this article, we will be sharing in-depth secrets about his biography, music career, relationship, age, awards, endorsement deals, and most importantly, his net worth in dollars and Ghanaian cedis.

Who is Shatta Wale?

Growing up, Shatta Wale lived with his family in Laterbiokorshie, Dansoman, and then Korle Gonno during his formative years.

At his tender age, his father introduced him to the Jamaican culture by playing Reggae records in the house and also continuously travelling with him to the UK to meet his relatives, who were half Jamaicans.

Shatta Wale lived in almost all the ghettos (Nima) in Accra to survive. He later went to Jamaica to polish and master his dance hall craft.

He attended Seven Great Princes Academy at Dansoman, a suburb in Accra, while he was in the academy, Shatta Wale demonstrated an affinity for arts as he acted in a popular drama series, By the Fireside, at the National Theatre of Ghana.

His father, Charles Nii Armah Mensah Snr, is a politician, businessman, and legal practitioner while his mother’s name is Elsie Evelyn Avemegah.

Shatta Wale’s father has affiliations in Accra and Volta Region area and still has his better portion of fame around Ghana. He even has a fancy nickname; Shatta Capo.

Shatta Wale might currently be one of the biggest artists in Africa but he has come a long way in the entertainment scene.

The Ghanaian singer rose to the limelight in 2004 after releasing his single titled “Moko Hoo,” in which he featured Tinny. However, he was known as ‘Bandana’ at that time.

He couldn’t keep up with the pace of the music industry and went AWOL for some years before making a comeback in 2013 with a new stage name called ‘Shatta Wale’ rather than ‘Bandana’.

Shatta Wale came back with a desire to succeed in the industry and he started off with a record label of his own branded as the ‘Shatta Movement Records”.

Ever since he started his record label in 2013, Shatta Wale has been releasing songs almost every day on his social media handles free to download, and would perform them in small communities in Accra mostly in Nima.

The talented singer started gaining slow attention again with songs like “Telephone No” “Anastasia” “My Eyes Pon Di Money” and others. This approach revived dance hall in Ghana, a genre that had been left abandoned.

Shatta Wale gives credit to the likes of Terry Bonchaka and Yoggy Doggy for nurturing him when he began his dance hall journey.

Largely producing and mastering the majority of his songs such as “Havana”, “Shatta City”, “Enter the Net”, “Everybody Likes My Tin”, and “Dance hall King”, the latter of which became his biggest hit after his comeback.

The tracks were well received in Ghana and globally with critics talking about the influence of Jamaican dance hall as many Ghanaians were only used to the type of dance hall called Hip-life with a touch of reggae.

The Guardian qualified “Wine Ya Waist” featuring Davido, one of the richest musicians in Nigeria, among its five most listened new tracks from around the world.

Ever since Shatta Wale made a comeback to the music industry in 2013, he has been dishing out hit tracks as well as collaborating with top artists across the globe.

Shatta Wale has been caught in some controversial scenes and this started to surface after the 2013 Vodafone Ghana Music Awards (VGMA).

This was an incident that will stick to fans’ memory for so long as Shatta Wale claimed that he was the rightful nominee to win VGMA’s Dance Hall Artiste of the Year, accusing the organizers of giving it to an undeserving female Dancehall artiste “Kaakie”.

He vents out his anger by releasing a song titled “Me Need No Awards” in which he dissed the VGMA for their supposed slight. It was after this entire episode that he declared himself Ghana’s Dance Hall king with a new release titled ‘Dancehall King”; a hit that brought him fully into the limelight.

The talented singer and songwriter are traditionally married to his girlfriend Michelle aka Shatta Michy.

They have two kids despite that Shatta Wale once stated that confusing that he will finally settle down and claim the full responsibility of family life when he turns 72.

Shatta Wale has never been shy in showing off his wealth on social media, in 2016, he bought a mansion at East Legon and shared a picture of himself standing behind the swimming pool of the mansion.

The palatial mansion is reportedly worth a staggering $1 million. The mansion boasts modern architecture, furniture, fine details, and countless other luxurious materials used to finish the home.

Just like the majority of the top artists in the music industry, Shatta Wale loves exotic cars and he has been consistent in getting for himself.

The reggae and dancehall singer shows off his cars which are the likes as Range Rover, Toyota Camry, Chevrolet Camaro, Maserati, and a G Wagon. The combined worth of these cars is close to $1 million.

Shatta Wale net worth in 2022 according to Forbes is estimated at $6.5 million dollars, making him one of the Top 10 richest musicians in Ghana.