Home Celebrity Net Worth and Biography Adeyinka Alaseyori Biography, Net Worth, and Career (2022) 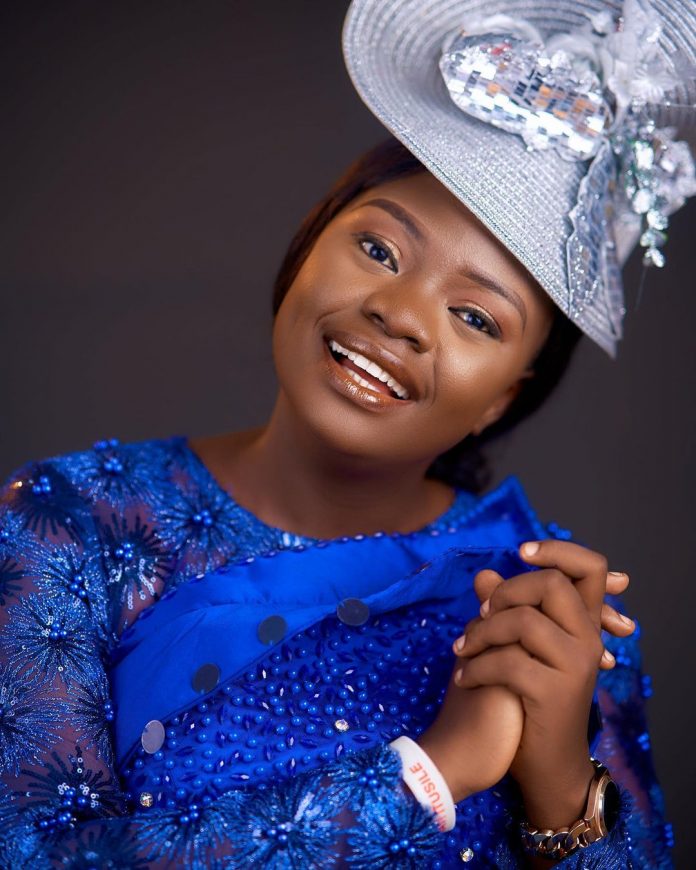 Adeyinka Alaseyori net worth has become one of the most asked questions on social media as fans continue to ponder where she ranks amongst her colleagues in the industry.

Gospel artists in Nigeria have been able to grow a huge fan base across the globe with their spirit-filled songs and Adeyinka Alaseyori has become one of the best.

In order to take fans out of the dark on her career, this article will unravel the mystery behind her biography, music career, controversies, relationship, and lifestyle.

Adeyinka Alaseyori whose real name is Adeyinka Adeyemi was born in Lagos State, Nigeria on June 4. The talented gospel singer and songwriter hails from Ondo State but spent all her time in Lagos State, the state where she was born.

She was born into the family of Mr and Mrs Adeshina and Funmilayo Adesioye but she grew up with her grandmother as her parents separated at the time she was born but reconnected years later. Adeyinka is the first of four children born by her parents.

Adeyinka’s age has always raised eyebrows on social media with the star singer failing to reveal her real age.  However, reports claim she’s above 30 years as of 2022. She was however born on the 6th of June.

Her love for acquiring knowledge saw her proceed to Higher Institution at Lagos State Polytechnic, where she graduated with a degree in accountancy.

Adeyinka Alaseyori then proceeded to bag another degree in accountancy at the National Open University of Nigeria (NOUN).

She started her music career at a tender age. She started leading her peer group in praises and events, and by the time she got to High School, she had become a pillar in the church.

Her journey as a musician as an adult began when she joined the choir unit at CAC Oke Isegun where she sang for years before proceeding to Jesus The Key Christian Assembly, where she started her journey into the limelight.

By 2011 God established his covenant with her, which resulted in her having her ministry with less than 18 members.

She started fully her musical career in the year 2012 and currently her ministry will be  9 years by July 2021.

Her dominance in the music industry has seen her drop many singles and collaborations.

Some of her songs include:

Dropping an album in the music industry is not an easy task but due to hard work and dedication, Adeyinka Alaseyori has been able to dish out three powerful albums.

Adeyinka Alaseyori has a good relationship with her fans and lovers on social media but one question has been asked on many occasions.

Yes, Alaseyori is married. The beautiful screen diva got married to her long-time friend manager on December 5, 2015. The event took place in Lagos and it was graced by notable faces in the gospel music and movie industry.

Alaseyori got married to Prince Dave Akinyemi on December 5, 2015. Her husband who hails from Osun State is an aspiring filmmaker and artist manager. Their union is also blessed with children.

Just like her colleagues in the music industry, Adeyinka Alaseyori has also been caught in a controversial scene and it involved Tope Alabi.

Tope Alabi came under the spotlight when she criticized Yinka Alaseyori’s hit single ‘Oniduromi’ during one of her appearances at a church overnight program that preceded the June 12 Protest day across Nigeria.

The popular gospel singer, while ministering at a vigil in the early hours of June 12, 2021, criticized the term Adeyinka Alaseyori, used in hailing God.

Alaseyori referred to God as “Oniduro” in one of her songs but Tope found fault with this and publicly criticized the song and the singer, saying that the Holy Spirit did not approve of the term “Oniduro” being used to describe God.

She explained that when she tried singing the song, the Holy Spirit cautioned her.

Fans on all social media platforms dragged Tope Alabi for making such a comment with some insisting that she’s jealous.

Just like her colleagues in the music industry, Adeyinka Alaseyori has been using social media to promote herself. Her official Instagram account @adeyinkaalaseyori currently boasts 312k followers.

Having dished out hit songs and albums ever since she rose to the spotlight, Adeyinka Alaseyori is currently one of the richest gospel singers in Nigeria with an estimated net worth of $100,000 dollars as of 2022.

Which church does Adeyinka Alaseyori attend?

The churches she attends are RCCG (Redeemed Christian Church of God), CAC (Christ Apostolic Church), and MFM (Mountain of Fire and Miracle ministry) and has performed on different occasions in all of these churches and beyond.

Who is Adeyinka Alaseyori’s husband?

Alaseyori got married to Prince Dave Akinyemi on December 5, 2015. Her husband who hails from Osun State is an aspiring filmmaker and artist manager. Their union is also blessed with children.

How old is Olayinka Alaseyori?

Adeyinka’s age has always raised eyebrows on social media with the star singer failing to reveal her real age.  However, reports claim she’s above 30 years as of 2022. She was however born on the 6th of June.

Which state is Adeyinka Alaseyori from?

The talented gospel singer and songwriter hails from Ondo State but spent all her time in Lagos State, the state where she was born.