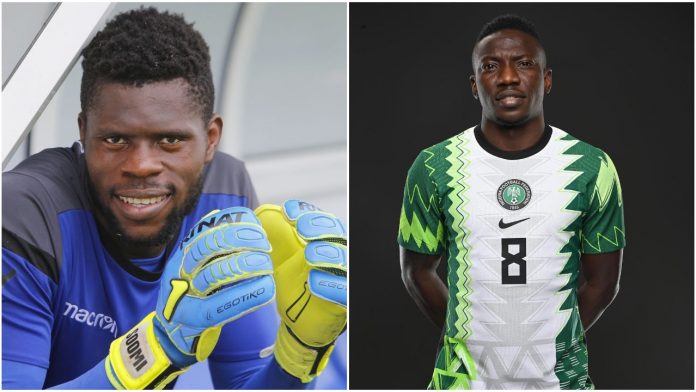 Nigerian footballer and Midfielder, Etebo Oghenekaro in a recent video was seen making a mockery of fellow Nigerian teammate, Francis Uzoho who is a goalkeeper.

Recall Francis Uzoho made headlines some years ago when he claimed he was 19 years old but was mocked in 2019 Ghanaian actress Ella Mensah and others after celebrating the Birthday of his son who turned 17 years old.

In 2019, a former ex-super eagles Media officer, Colin Udoh addressed the allegation surrounding the age of Uzoho, who was the youngest player at the 2018 FIFA World Cup, by sharing a picture of Uzoho when he represented Nigeria at Under-17 level at the age of 14. (READ IT HERE).

Etebo on the other hand joined Galatasaray on a season-long loan from Stoke City. The 24-year-old who will spend the 2020/21 campaign at the Turkish club, was unveiled on Wednesday, September 9 after undergoing his medicals.

“Galatasaray Sportif A.Ş. informed the Public Disclosure Platform that an agreement was reached for the transfer of professional football player Oghenekaro Etebo until the end of the season,” the club revealed on its website.