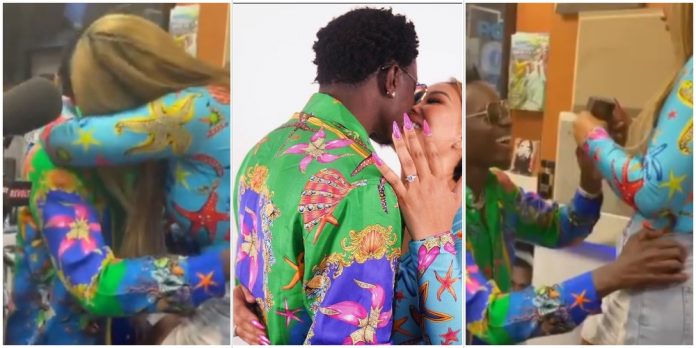 Michael Blackson who has become popular for flashy lifestyle on and off social media was having an interview on an American radio show, The Breakfast Club, when he asked the decisive question, will you marry me?.

The talented actor went down on one knee and proposed to Rafa after show host Charlamagne asked if he would propose to her towards the end of the interview.

According to Micheal Blackson on why he decided that Rada was the woman he wanted to be with for the rest of his life, her loyalty has been out of this world ever since they met.

Michael Blackson during the interview also stated that he’s allowed one side chic a month despite being engaged to Rada.

Before the proposal, the talented actor told the hosts that he and Rada initially had relationship problems but they’ve reached a compromise.

He said she initially had a problem with his lifestyle but they resolved that, with him being allowed 1 side chic a month.

“We negotiated. I’m cutting down on the side bitches from 3 a month to maybe 1. We negotiated I’m allowed to have 1 chic a month.

“I realized that it’s just in me to live that life” Michael Blackson said.