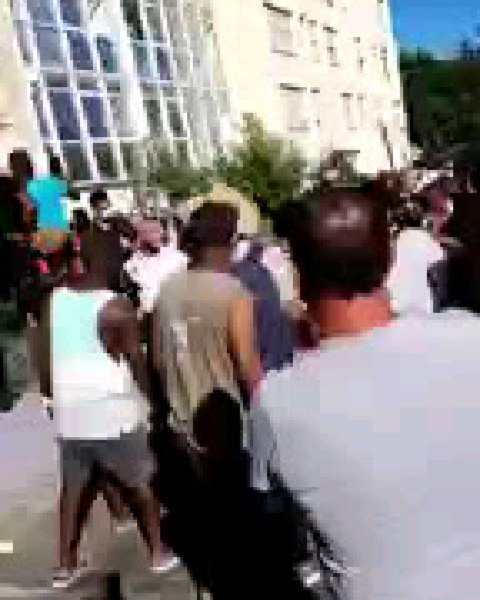 Three Nigerian migrants have died after they jumped out of windows of a public house building to escape a fire in the southern part of France, Marseille.

The incident happened shortly after 5 a.m on Saturday, July 17, when a fire broke out of the building in the housing estate “Les Flamants” where migrants from Nigeria are known to squat.

A two-year-old and an adult were also seriously hurt in the blaze inside the ten-floor building, Marseille public prosecutor, Dominique Laurens, said.

The three victims, aged 20 to 30, apparently desperate amid the flames spreading in the building, jumped out of windows.

Knotted bed sheets hanging from the facade indicated how desperate the victims had become on noticing the fire, according to the AFP news agency.

Speaking during a press briefing, Laurens said the fire spread quickly through the technical shafts, but did not reach the apartments which are “free of smoke penetration,” suggesting the blaze was started deliberately.

“The existence of two fires, one on the sixth floor, the other in the stairwell” prompted investigators to launch a criminal investigation,” the public prosecutor added.

Meanwhile, the Nigerian community of Marseille accused drug dealers of causing the tragedy.

“The dealers terrify us. They have guns. They prevent us from sleeping,” Azeke Endurance, 30, told AFP.

According to the police chief, Frederique Camilleri, there indeed is “a notorious degree of drug dealing here” as well as “tensions between the inhabitants and the traffickers.”

Echoing Camilleri’s statement, the public prosecutor, also described the situation on the ground as extremely tense, adding that the prices of drugs are written on the walls in the stairwell of the building.

A 31-year-old Nigerian man had been living there for a year with his wife, now six months pregnant. Every month, the couple had to pay illegal rent to drug dealers who deal in the building.

In other news, there is peace in Ile Ife, but over the weekend the sister of the wife of Ooni of Ife went viral when a video of her dancing with her curvy backside set social media on fire (watch the video here).