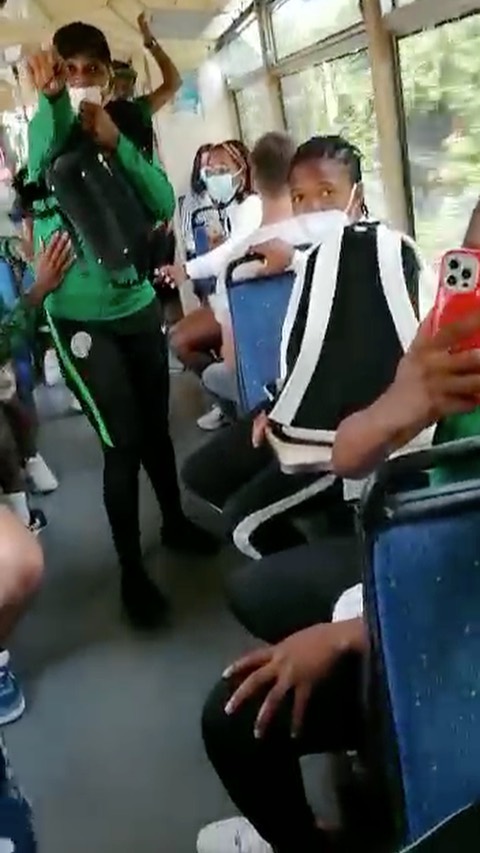 The Nigerian Super Falcons who are currently on their way to Tokyo Olympics,2020 experienced the unusual and the unexpected as they got abused while in transit via Austria by a Nigerian Man.

According to the man, the falcons are not supposed to be representing Nigeria and they should go back home.

That no one should be representing a Terrorist country like Nigeria, where President Buhari is the one behind the terrorism in the country as he continues to kill many Nigerians.

While he was verbally abusing the falcons, some other passengers on the train tried to talk to him but he threatened them that he will call the police on them and that no one should touch him, after all this is not a third-world country.

Meanwhile, on the local scene, a Pastor in his latest sermon revealed that Sex before marriage is not a sin, his post has created different opinions among Nigerians. (watch the video here).

On the entertainment scene, Curvy Sister Of Ooni’s Wife, Similoluwa ‘Steals Show’ With Her Backside At Royal Event (watch the video here).

READ ALSO
Being a woman is hard, but being a black woman is even harder – Justine Skye

Violette - July 2, 2019 0
Miracle Is Forever! Big Brother Naija Star, Nina surprised her fans by revealing a new tattoo of Miracle’s name in Disney font on her...

Violette - July 23, 2021 0
Controversial Nigerian cross-dresser, Bobrisky has taken to his official Instagram page to share a video of himself undergoing surgery on his backside. Bobrisky in the...

You must hammer and forge yourself – BamBam says (photo)

Violette - July 1, 2020 0
You must hammer and forge yourself, Bambam says in a new caption. Getting rich and making it in this world is a must just as...

Singer Portable in tears as he is gifted the second vehicle in a month,...

Johnson Olumide - January 1, 2022 0
High-flying fast-rising Nigerian singer, Portable cried like a baby as he was caught on camera full of tears as he is gifted the second...