Home Sports Football “I am the solution not the problem” – Arsenal Coach, Arteta fire... 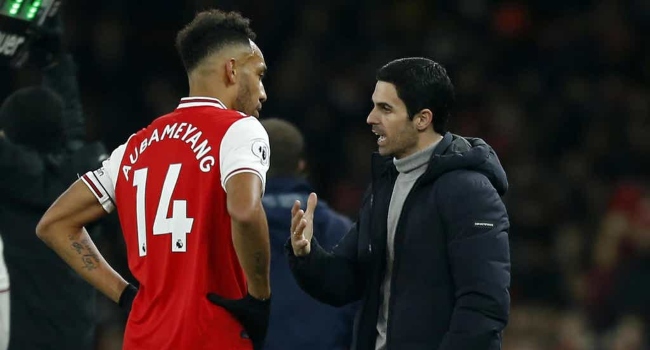 Arsenal’s current manager, Mikel Arteta has fired some warning shots at former Arsenal player and ex-captain, Pierre-Emerick Aubameyang days after the now Barcelona player revealed that the coach was not happy.

Aubameyang was stripped of the captaincy and frozen out by Arteta after a breach of discipline last month.

Explaining his Arsenal exit at his Barcelona unveiling Aubameyang said: ‘I think it was a problem just with him [Arteta]. He made the decision. I can’t say much more. He wasn’t happy, I stayed very calm and that’s it.’

Speaking for the first time since Aubameyang’s departure, Arteta said: ‘I’m extremely grateful for what Aubameyang has done at the club and his contribution since I have been here and the way I see myself in that relationship is the solution not the problem.

‘I have been the solution. One hundred percent. I can look in the eye of everyone. I do a lot of things wrong for sure but the intention all the time is the best and not for me, it’s for the club and the team.’

In England, Kurt Zouma got into more trouble earlier today, as sport wear brand, Adidas terminated its sponsorship deal with the player after a video of him hitting his cat went viral on social media.

He was fined $338,763 by West Ham this morning and his two cats have been taken into care by the RSPCA, a UK animal welfare charity.

West ham coach, David Moyes during the post-match interview also spoke on his decision to play Kurt Zouma against Watford after a video surfaced Monday showing him kicking and slapping a cat.

According to him, the club will sort the other side of it out, and he will look after the football side.