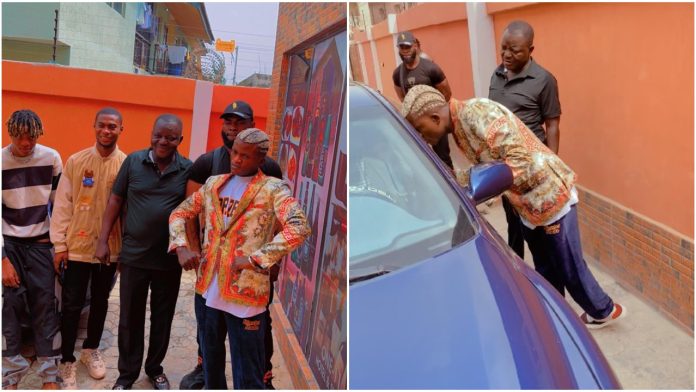 Nigerian fast-rising singer, Portable aka Zazoo Zeh surprised his father earlier today as he buys him a brand new car.

He purchased a new blue-colored Toyota reportedly worth N3 million and drove it to their family house to surprise his dad.

The fast-rising artiste took to his Instagram page on Wednesday, February 9, and shared a video of him presenting the car to his dad.

Portable also introduced his handsome younger brother who joined him in making the video with joy. His dad was full of smiles but he seemed so stunned by the gesture that he did not utter a word in the clip.

Portable since his rise to fame in December 2021 has been involved in many controversies on social media, his latest drama is the way he allegedly abused some Kenyan women some weeks ago (watch the video here).

In other news, Social Media Personality, Destiny Amaka leaves little to the imagination as she rocks multicolored swimwear (See all the NSFW 18+ photos here).

Meanwhile, BBNaija Star, Nini Blast Pere for calling her a gossiper in a new interview, says don’t fuck with me (watch video here).

“Oluwa cover me, they want to kill a superstar!” – Portable exclaims as he narrowly escapes death in car crash (Video)