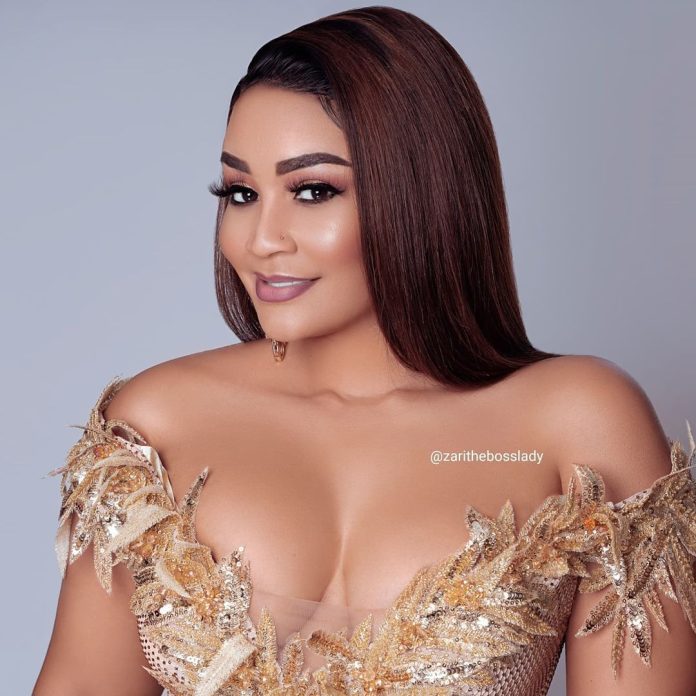 Zarinah Hassan is a Ugandan reality TV celebrity, businesswoman, philanthropist, and singer often recognized as Zari the Boss Lady or Zari Hassan. Her residence and most of her businesses are in South Africa. So let’s explore her biography, age, net worth and career.

Zari Hassan is a Ugandan reality TV celebrity, businesswoman, philanthropist, and singer (born September 23, 1980). Her maternal grandpa is Indian, and her grandma is Ugandan; hence, she is mixed. On the other side, her granddad is a Somalian, while her grandma is a Burundi native.

Nasur and Halima Hassan gave birth to Zari Hassan in Uganda. Her mother died at Nakasero Hospital in July 2017 due to heart failure.

Zari Hassan attended Jinja Girls High School for her secondary school study. She was a part of the music, theatre, and dance groups in high school. For the second year in a row, her talent garnered the best actress prize.

After graduating from high school, she travelled to Kampala, where she earned a living by singing Karaoke at various establishments. She subsequently took a break from acting to continue her college studies in the United Kingdom, where she received a diploma in cosmetology.

Zari Hassan did not spend much time in London because she returned to Uganda to create her business empire while pursuing her singing career.

Zarinah Hassan found her musical abilities at a young age while growing up. She began singing in primary school and even sang at her school’s end-of-year event at one time. She also participated in musical talent shows and contests, most of which were arranged by the personnel at her school.

Zari Hassan released her first single, “Oliwange” (You’re Mine), in 2007. In Johannesburg, South Africa, the track was nominated for the Africa Channel O Awards in Best East African Video of the Year.

Zari Hassan was named Diva Award of the Year in the Diaspora category in 2009. The Boss Lady is a South African entrepreneur who runs a tertiary college and a cosmetics store and her music career. All these career successes had a significant impact on the net worth of Zari Hassan.

● In Love With The Dance Floor

Zari Hassan is in charge of the school’s network administration. She is the CEO and appears to be doing a fantastic job.

Home In Waterkloof in SA

Zari, the boss lady, dwells in Waterkloof, South Africa, in their residences. The mansion features a large swimming pool and all of the trappings of a wealthy family. Money is the true determinant of one’s lifestyle.

It’s unclear whether Zari Hassan, the renowned socialite turned entrepreneur, will continue running the highly profitable real estate business her ex-husband Ivan left behind. The real estate firm is one of the country’s largest.

Ivan Semwanga’s expensive toys, which included a Lamborghini, Chrysler, and a slew of other high-end models, were all left behind for the boss lady.

She purchased a Mercedes Benz E 250 CDI in September 2017 for an estimated price of Ksh 8 million. Zari is also a Mercedes brand ambassador, a position that puts Zari Hassan’s net worth beyond many people’s comprehension.

Zari Hassan bought an Audi Q7 just a few months after purchasing the Mercedes CDI. The luxury car, complete with a luxurious interior, caters to the boss lady’s high-end requirements.

In addition, she got a Range Rover Sport HSE. Zari’s newest car, worth approximately Ksh 6 million, is the latest addition to his fleet. The 2018 BMW X6 model is designed to be a fashion sensation everywhere it goes.

This car is a much-desired addition to Zari’s vast fleet since she enjoys not only the luxury that nice things may bring but also the attention that her opulent lifestyle attracts.

● In 2008, she was awarded a Channel O Music Video Award for best East African artist.

● She later won two awards at the African Social Entertainment Awards (ASEA) in South Africa in 2021. Ms. Hassan received the Sophisticated Woman of the Year title and the Best Entrepreneur of the Year honor.

Ivan Ssemwanga, a Ugandan-born South African celebrity, was Zari Hassan’s late husband. Before divorcing in 2013, the pair had three boys together. After going into cardiac arrest in May 2017, Semwanga died.

She began a love relationship with Diamond Platinumz, a 9-year-younger man, in 2014. They had two kids together. Their marriage, however, came to an end in 2016 when family members compelled the artist to do a DNA test on one of their children to verify that Tiffah was her real daughter.

She has also had a relationship with King Bae; GK Choppa is Zari Hassan’s current lover. Many speculated that she was dating Rick Ross.

Zari Hassan has three sons from her first marriage to Ivan Ssemwanga. Pinto, Dido, and George Semwanga are the children’s names. Ivan Ssemwanga’s three other children, whom he had with his prior wife, are also looked after by Zari Hassan. Her marriage to Diamond resulted in two daughters, Nillian and Tiffah. She is currently residing in South Africa with all of her children.

Zari Hassan, alias Zari the Boss Lady, is a Ugandan socialite, musician and businesswoman with an estimated net worth of  $10 million as of 2022. Her principal source of fortune, according to sources, is her sizable share of her late husband’s estate.

Zari Hassan, alias Zari the Boss Lady, is a Ugandan socialite, musician and businesswoman with an estimated net worth of  $10 million.

How old is Zari The Boss Lady?