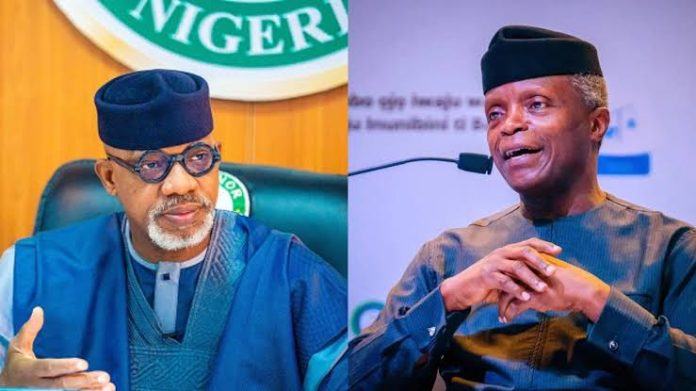 The Ogun State Governor, Dapo Abiodun, on Tuesday, said the state would support Vice President Yemi Osinbajo’s presidential ambition to enable him to continue with some of the laudable projects of the regime of the President, Major General Muhammadu Buhari (retd.).

Abiodun disclosed this when he and other members of the State Executive Council accompanied Osinbajo to the palaces of some prominent traditional rulers in the state in continuation of the Vice President’s campaign ahead of the presidential primary of the All Progressives Congress.

Abiodun said Osinbajo, in the last seven years, had contributed to the many successes recorded by the Federal Government, noting that “he is eminently qualified to lead the country.”

He said, “The Vice President’s presence here is homecoming. We are pleased with his decision to run for the office of the President. He is competent and committed to lead the country in a higher capacity.

“Your steadfastness, integrity and character are all well known. You are serving this country and the President meritoriously for the last seven years as the vice president. We have no doubt that you will do well as the President and we will support you.”

Speaking on the ambition of the Vice President, the Alake and Paramount Ruler of Egbaland, Oba Adedotun Gbadebo, attested to the competence of Osinbajo, saying, “the vice president has paid his dues and is eminently qualified to succeed as President.

“I want to pray that you will come back to this Palace as a President and Nigeria will gain tremendously under your watch.”

Osinbajo, on his part, expressed optimism that he would emerge victorious.

The Vice President boasted of winning the election when he paid a visit to the palace of Oba Gbadebo.

This is just as he said his administration would bring peace, unity and development to the country.

He had earlier visited the Akarigbo and paramount ruler of Remoland, Oba Adewale Ajayi, in his palace in Sagamu.

He sought the support and blessings of the traditional rulers, promising that he would serve with humility when elected President.

He said he had consulted widely, including with Buhari, before he joined the race.

He said “I want to say that Kabiyesi is a good man of fortune. Every time I have visited Kabiyesi, after it, I always become victorious. That is to say that it is a good one.

“Every time that I have visited him, at least in this political journey, it has always become victorious.

“I am always happy when I am coming to see Kabiyesi because I know that the outcome will be victory.”

Osinbajo said he had served the country with loyalty.

He added, “The Vice President’s position is an opportunity to serve and I have served with utmost loyalty. I put everything into my work. I am a candidate who will hit the ground running when I am elected.

“I have the requisite knowledge to do the job and building on what others have put in place. My Presidency will bring peace, unity and development to the country.”