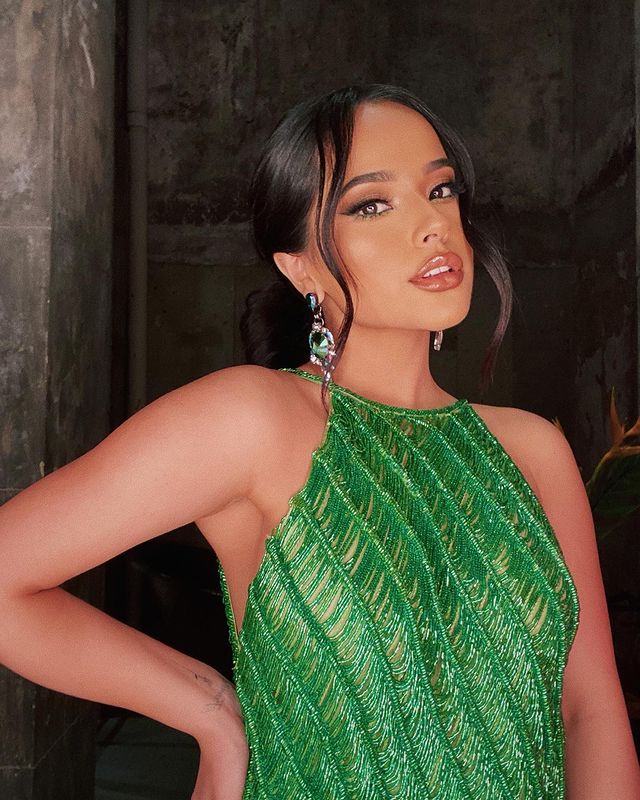 Becky G is an American singer-songwriter, rapper, model, dancer, and actor. At the age of 14, she was found on YouTube and had her first major break. Backy’s triumph, however, does not materialize quickly. She is a vocalist who rose to prominence at a young age by posting renditions of famous songs to her YouTube account.

Becky G released both her first EP, Play it Again, and her debut song, Becky from the Block, in 2013. Her breakout track Shower, which reached number 20 on the Billboard Hot 100 and has over 460 million views on YouTube, catapulted her to prominence.

Becky G returned to the public with smash songs Problem (The Monster Remix) and Oath, both of which charted on the Billboard Hot 100. Becky has had a lot of success in the entertainment world as an actor in addition to recording music. In the 2017 superhero film Power Rangers, she played Trini Kwan / Yellow Ranger. We’ll talk about Becky G’s complete net worth, earnings, opulent lifestyle, and other fascinating details in this post.

Becky G (born March 2, 1997) as Rebbeca Marie Gomez in Inglewood, California. Her parents were born in the United States, while her four grandparents are from Jalisco, Mexico. Alejandra “Alex” Gomez and Francisco “Frank” Gomez, who were just 18 and 19 at the time of her birth, are her parents. Frankie and Alex have a sister called Stephanie, and she had three younger siblings.

Becky has vivid memories of playing football and baseball as a kid in Inglewood, as well as putting up talent performances and racing through her Sprinkle with her younger brothers. She was a member of the after-school dancing squad while she was in elementary school. Her major musical inspirations are Jennifer Lopez, Christina Aguilera, Thala, and Selena Gomez.

When her family’s home burnt down when she was nine years old, her parents had little choice but to relocate their big family into the garage of her grandparents’ home in Moreno Valley. Becky realized at the age of nine that she needed to do whatever she could to aid her family. She obtained representation and began working as a model and actor in commercials and voice-overs. She attended a public school before switching to homeschooling due to bullying difficulties.

In 2008, she was cast as Claudia Gómez in the short film El Tux. Then she won another role in the Discovery Channel’s La estación de la Calle Olvera TV movie. Becky used the additional time after dropping out of public school to seek further jobs and became engaged with the female group G.L.A.M.

All rehearsals, concerts, and music videos would be filmed by the four G.L.A.M females. Becky G subsequently collaborated with the “BCG” female group. She had learned to play the guitar and rap by the age of thirteen.

In 2011, she collaborated with the band “The Jam” on her next effort. The Jam served as her production firm and rating collaboration as she assembled versions of popular hip-hop and mainstream tunes. Otis by Kanye West and Jay-Z, Lighters by Eminem and Bruno Mars, Novacane by Frank Ocean, Drake’s Take Care, and Turn the Music Up by Kanye West and Jay-Z were among the songs performed.

Becky G returned to English-language music in 2019 after releasing several popular Spanish tracks. She released many songs, including LBD and Green Light Go. She proceeded to work with other artists on songs such as Maluma’s La Respuesta, Myke Towers’ Dollar, and Zayn Malik’s multilingual rendition of “A Whole New World,” which was included on the soundtrack for Disney’s adaptation of “Aladdin.” Becky G made guest appearances on Akon’s popular song Cómo No and J-multilingual Hope’s single Chicken Noodle Soup towards the end of 2019.

The album was a huge success, peaking at #3 on the Billboard Top Latin Albums list and #8 on the Spain Streaming chart. Becky kept working with vocalists like Carlos Rivera, Gente de Zona, Ozuna, and others.

According to Hollywood Life, Becky G and singer Austin Mahone began dating in April 2015, but the two quickly broke in August of that year.

Becky’s romance with soccer star Sebastian Lletget began the next year. Since football player Sebastian shared their photos together on Instagram on May 31, 2016, the pair has been seen together at various parties and events.

Becky G is an American singer-songwriter, rapper, model, dancer, and actress with an estimated net worth of $8 million. She is one of the most promising singer-songwriters in the United States, having collaborated with a number of well-known singers on a number of popular songs.

Shower, Oath, Can’t Stop Dancin, and Mayores were among Becky G’s four singles to chart on the Billboard Hot 100. Mayores has received almost 2 billion views on YouTube. She also won a part as Trini Kwan / Yellow Ranger in the Power Rangers film, which she played on Empire.

After traveling and working with musicians such as Will.i.am, Justin Beiber, Katy Perry, Bad Bunny, Jay Balvin, Cody Simpson, JLO, and others, she became very successful. Her YouTube page, where she uploads her music videos and receives billions of views on practically every single one, initially caught the attention of a wide audience. Becky G’s YouTube channel has over 20 million followers, which is a huge accomplishment for her, and her net worth is steadily increasing as a result of her popularity.

Her principal source of revenue is the music industry, which includes record sales, live performances, worldwide tours, hit songs, her YouTube channel, and sponsorship partnerships. Becky was able to purchase her parents a beautiful house in the opulent city of Los Angeles, California, because of her success.

In early 2020, she was named PrettyLittleThing’s brand ambassador. She has also done commercial work for Disney Channel and Nickelodeon, as well as appearing in advertisements for prominent brands like McDonald’s and CoverGirl. Becky G earns over $1.5 million each year.

What is the net worth of Becky G?

Becky G is an American singer-songwriter, rapper, model, dancer, and actress with an estimated net worth of $8 million.

How much is the salary of Becky G?

What is the age of Becky G?

Rebbeca Marie Gomez was born on March 2nd, 1997 in Inglewood California, she is 25 years old.