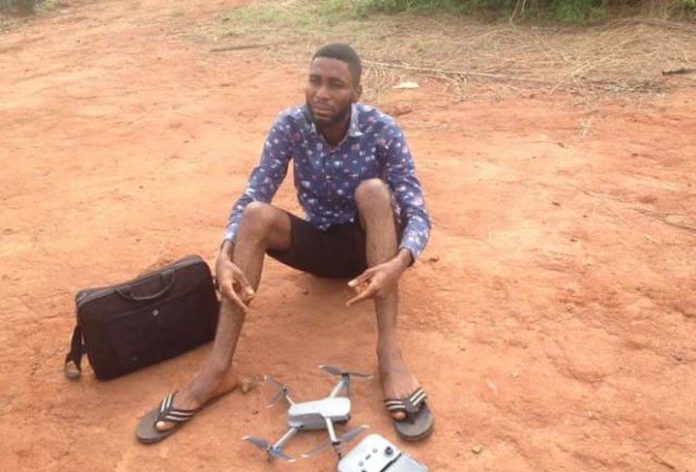 A 31-years old man Michael Ali was on Saturday arrested, by operatives of Nsukka Urban Police command for allegedly spying, filming and taking pictures of High Way to Grace Assembly Church, Nsukka, with a drone camera.

A Police officer in Area Command who pleaded anonymity confirmed the arrest of Ali and said that they responded to a distress call From Rev Chikamadu Eze, the Founder and General Overseer of the church around 8.30am.

“Police from Nsukka area command rushed to the church compound at Alor-Uno Community in Nsukka Local Government Area of Enugu State and arrested the suspect together with the drone and a smartphone.

“Police has commenced investigations to unravel his mission in that church and possibly identify those who sent him to spy the church environment,” he said.

In a chat with newsmen, Rev Eze said that he was shocked when he saw the drone hovering around his church premises while the operator was hiding in a nearby bush.

According to Rev Eze whose residential house is within the church compound, “I stepped out of my house around 8am and noticed a strange sound of a flying object. On a closer look, I saw a drone camera hovering around the church and my private residence, filming and taking pictures.

“After some minutes the drone flies back to a nearby bush where Ali, the operator was hiding and operating it.

“I followed the drone to the bush, where I caught him and immediately alerted the police who responded promptly and arrested him.

“From all indications, his target is to film and capture pictures of the church and my compound as the drone did not fly over any other building or compound around the area.

“This is a serious security breach and a threat to my church and my household because Ali equally captured my image with the aid of the drone without revealing his agenda for doing so,” he said.

The Cleric, however, threatened to sue Ali in court should he refuse to confess his evil agenda against his family and the church.

Meanwhile, Ali who is from Agu-Ibeji Community, in Igbo-Eze North LGA told our reporter before he was whisked away by the police that he is only an independent filmmaker filming the environment for a film documentary.

Ali however, did not give a clear answer when asked why he choose to hide in a bush to operate his camera drone, and why he did not identify with the residents before filming the environment.

At the time of filing this report, Ali was still with the Nsukka Urban Police Divisional Headquarters, responding to some investigative questions on his action.

Chris Okotie Tells Peter Obi, Tinubu To Withdraw From Presidential Race For Him