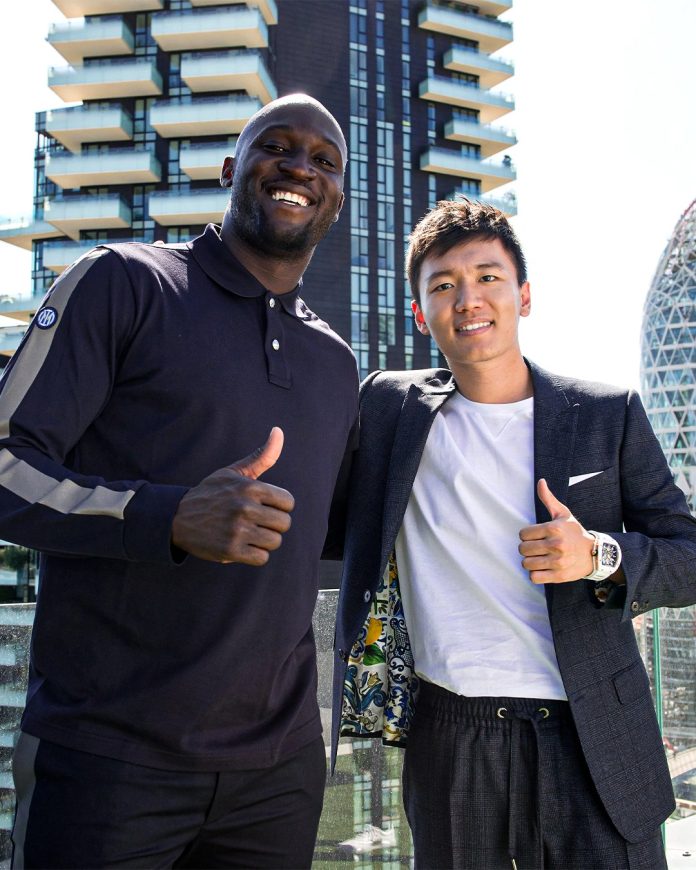 After his disastrous second stint at Chelsea, Romelu Lukaku has sealed a return to Inter Milan with no requirement to purchase.

In addition to paying all of his salaries this season, Inter will play Chelsea a loan fee of £6.9 million-plus £3.5 million in bonuses if they win the Scudetto.

The Chelsea forward arrived at Milan Linate airport about 6.20 a.m. local time, smiled for photos while wearing an Inter scarf, and then got in a car.

I’m so glad to be back, he exclaimed. After passing his physical, Lukaku was formally introduced as a new Inter player.

The Belgian striker endured a season to forget after re-joining the Blues for £98million last summer as he struggled to hit top form.

In a statement confirming the deal, Chelsea said: ‘The Belgian returns to the Italian side where he previously spent two years and won the Serie A title.

‘Lukaku came back to Stamford Bridge last summer, 10 years after initially joining the club as a teenager, and resumed life in the Premier League by scoring in a win at Arsenal, before netting twice in his first home game as we defeated Aston Villa 3-0, scoring his first goals at Stamford Bridge. CLICK HERE TO WATCH ALL HIS GOALS FOR CHELSEA.

‘He found the net again against Zenit St Petersburg but that would be the last time until the return match with the same opponents three months later, as he struggled to shake off the effects of an ankle injury suffered in another European tie against Malmo in October, which restricted his appearances in early winter.

‘Lukaku scored in back-to-back Premier League games against Aston Villa and Brighton between Christmas and New Year, before helping us to lift the FIFA Club World Cup trophy for the first time at the beginning of February. He scored the only goal as we beat Al Hilal 1-0 in the semis before opening the scoring in the 2-1 final win over Palmeiras.

The striker contributed further goals in the FA Cup before helping us secure a third-place finish in the Premier League in May, with a brace in a 2-2 draw against Wolves and completing the scoring as we beat Leeds 3-0.

‘Combined with his first spell at Chelsea between 2011 and 2014, Lukaku has made a total of 59 appearances for the club, scoring 15 goals.’

Inter CEO Giuseppe Marotta all-but confirmed the deal on Tuesday when he said: ‘We have to thank the availability of the presidency and the owners. I hope it can be closed, not in a few hours, but a few days.’

‘We cannot make it official yet,’ he added. ‘He is a returning player who has done very well with us and we are happy to bring him home.’

The 29-year-old notched just eight Premier League goals in the 2021-22 campaign, failing to live up to the performances that encouraged Chelsea to splash the cash in the first place.

Lukaku’s first spell at Inter began in the summer of 2019 and he fired Antonio Conte’s side to the Scudetto in the 2020-21 season, scoring 24 goals in Serie A.

The striker still has four years left on his contract at Stamford Bridge but stated a desire to return to the San Siro in the explosive interview over the festive period.

He stunned Chelsea six months ago by saying he’s ‘not happy with the situation’ at the club he left the Italian giants for, as well as keeping the door open to a return.

‘I think everything that happened last summer was not supposed to happen like this… how I left Inter, the way I left the club, how I communicated with Inter fans – this bothers me because it was not the right time,’ he said in an interview with Sky Sport Italia.

‘Now it’s the right time to share my feelings. I have always said that I have Inter in my heart: I know I will return to Inter, I really hope so. I am in love with Italy, this is right moment to talk and let people know what really happened.

‘I really hope from bottom of my heart to return to Inter not at the end of my career, but when I’m still at top level to win more together.