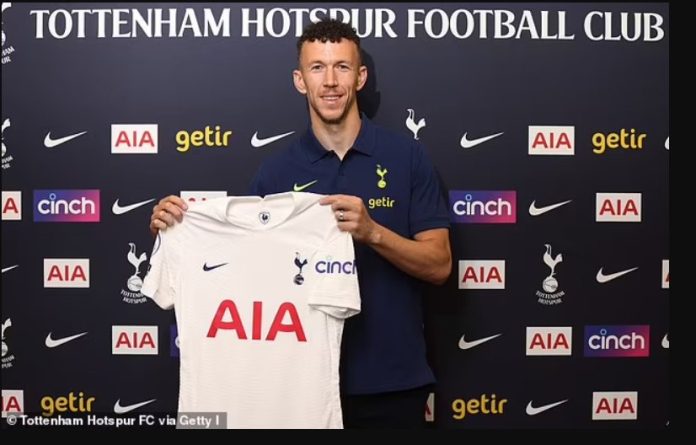 Tottenham Hotspur has finalized the free transfer of Ivan Perisic from Inter Milan.

On Tuesday, May 31, the 33-year-old Croatian international, who can play as a winger, attacking midfielder, second striker, or wing-back, signed a two-year contract with Antonio Conte, becoming one of the Italian manager’s first summer recruits.

After signing for the club,  Perisic told Spurs’ official website; “When I got in contact with the coach and the sporting director, I told them I had really wanted to come to the Premier League since 2009 when I started playing professional football in Belgium.”

“It’s a privilege to work with a coach like Antonio. It was a perfect year at Inter, I am very pleased to see him again. He lives football every minute, every hour and every day, even when he’s sleeping he’s thinking about it. “I was watching the last two or three games and, after the win against Arsenal, it was obvious Tottenham would reach the Champions League, and it was good for me because I want to play in the biggest games.”

Inter Milan chief executive Giuseppe Marotta admits he was keen to keep Perisic this summer, but was unable to convince him to extend his stay in Milan.

“There is regret,” Marotta said on Monday. “But he wanted to try a new experience in the Premier League.

“We were not in a position to make better offers, simply his choice was based on a different future than the current one. Maximum respect for that and a big thank you to him as well.”

Perisic, who has 113 caps for Croatia and scored in the 2018 World Cup final, had been at Inter since 2015. He won Serie A last season under Tottenham head coach Conte after spending the 2019-20 season on loan at Bayern Munich where he lifted the Champions League.