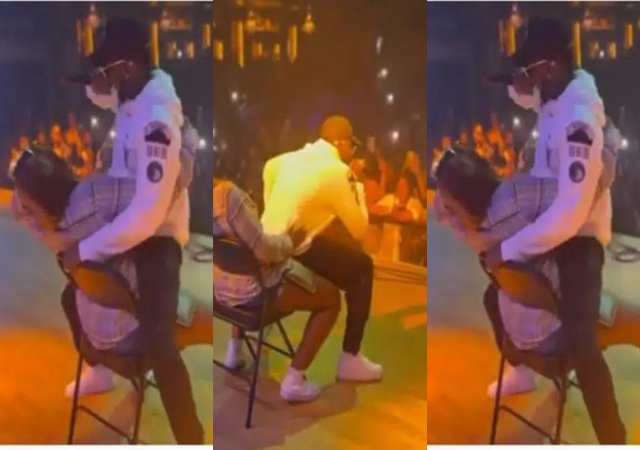 Fans have expressed concern after Oluwatobiloba Daniel Anidugbe, also known as Kizz Daniel, the popular Nigerian musician, got intimate onstage with a female fan yet again while singing his hit song.

A video of popular Nigerian musician Oluwatobiloba Daniel Anidugbe, often known as Kizz Daniel, performing at one of his concerts was the subject of earlier reactions.

The singer of “Lie” lifted one of his female followers, and the event was caught on camera.

Prior to dropping the microphone to help the woman dancing on stage, the father of two was singing. Rather, he picked her up by the behind.

In a new clip shared by the singer, he was again spotted on stage with a girl, this time performing sexual scene with the lady who was so excited to be touched by the singer.

Kizz Daniel was spotted performing different sexual positions with the lady to the bewildment of the viewing crowd.

This wild atitude made a lot of his concerned fans to react as they express concern over his recent atitude with ladies on stage….

peroopee: “Vado easy o o o ,you aren’t in Naija. enemies can come up with something 🤔..”

oshogweoflagos: “this is getting too much kizz 😢😂😂”

thepianopriest: “You no Dey do like before sha,or you no Dey post am..
This video worry my head,tf!”