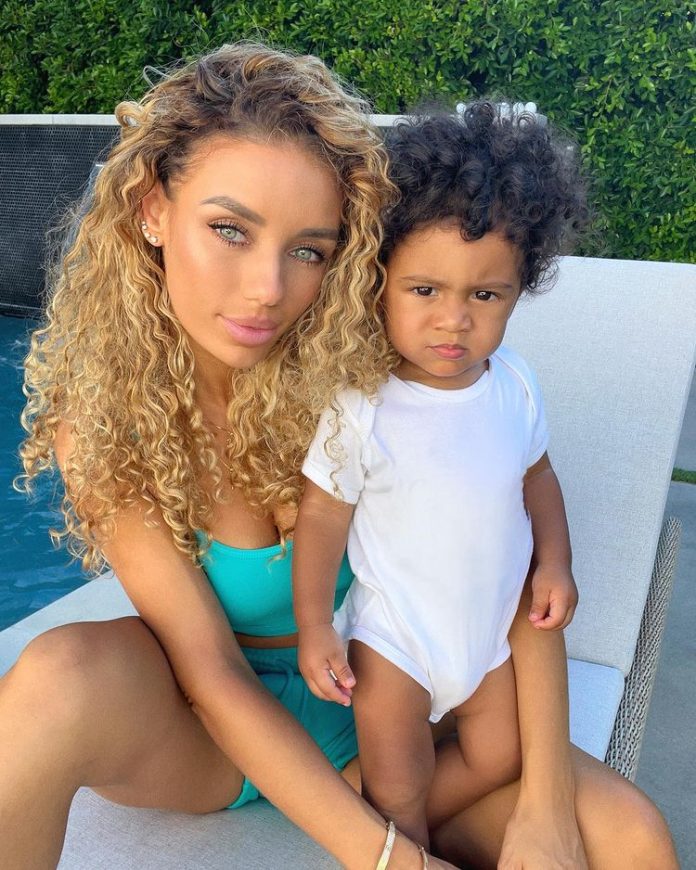 She is best known for being one of the top Instagram stars as well as fashion influencers in the country and has amassed a large fan following on social media.

Jena first came into the limelight when she started her relationship with a Manchester United football player named Jesse Lingard. Her modeling career started shortly after her high school graduation and since then Frumes established herself as one of the lead choices for numerous high-profile brands that she currently endorsing.

Apart from that Frumes is also a television personality and gained popularity in the entertainment industry after being cast one the comedy series, Wild ‘N Out, in which she made her debut in 2015. Not to mention Jena Frumes’s fan following further increased when she became the girlfriend of the popular singer Jason Derulo.

Jena Frumes was (born September 21, 1993), in Union Beach, New Jersey, to an African family.  She keeps her personal affairs very secret and hasn’t revealed anything about her parents.

Her family left New Jersey where she spent her childhood years and moved to Los Angeles, California in search of better prospects. Together with her younger sister, whose identity is unknown to the general world, she was reared by her parents. Frumes is of Native American, French, and African ancestry.

Upon her education, Jenna completed her high school graduation from her hometown in New Jersey and then enrolled at North Carolina University located in Durham. While studying in high school she developed an interest in the field of modeling but was not allowed to pursue a career in the modeling industry by her parents. Although she began her modeling career after her completing high school.

Jena began sharing her daring photos on her social media platforms, and she quickly gained a following. She also started to show up in advertisements for beauty companies and on the covers of other well-known magazines.

After getting a good response from her audience she began uploading travel vlogs, and videos about fashion, lifestyle, beauty, shots, and fitness-related content which helped her to gain even more subscribers. As of 2022 Jena Frumes has garnered nearly 200k subscribers on her YouTube channel.

Some of Jena’s most popular YouTube videos include “At Home Fitness Routine, Where I Buy Everything In My House, How To Save Your Curly Hair Tutorial, HONDURAS Swimming With Jaguars, Daily Curly Hair Routine & Products,” etc.

Frumes got her first big break when she made her acting debut on MTV’s popular TV show, Wild N’ Out. The show was presented by American actor, rapper, Nick Cannon, and Jena appeared in the show from 2015 to 2017.

Frumes proceeded to appear in other series after leaving the program, including Mango & Guava (2017) and the sports comedy-drama film She Ball, in which she portrayed the part of Kisha in 2020. After leaving the show, Frumes began receiving invitations to appear in other projects.
In the 2019 comedy television series King Bachelor’s Pad, Jena portrays Kimberly in the episode titled Compliments. Additionally, Jena made her acting debut in the 2019 horror-action comedy The House Next Door, where she played Bunny.

Jena also grabbed the attention of several artists and was featured in multiple music videos for some hit tracks like Marshmello’s “Ah Yeah by Jacob Latimore, Light It Up “, and Jeremih’s “I Think of You”, etc.

Jena started dating rapper Nick Cannon in early 2016, and they dated for one year before splitting up in March 2017.

She then dated Matt Barnes for one month after dating well-known football player Antonio Brown.

Jesse Lingard, a footballer for Manchester United, and Frumes originally met in 2016 and dated for a while after that. Before ending their romance in 2018, they began dating in 2017.

According to reports, Jena Frumes and Jason Derulo, a well-known American musician and rapper, started dating in March 2020. The duo posted a lot of entertaining content to their social media accounts, including TikToks. Jason and Frumes welcomed their first child, a son they named Jason King Derulo, on May 8, 2021. However, their union did not last long, and in September 2021, the two parted ways.

Jena Frumes is an American fashion influencer, actress, model, YouTuber, TikToker, and Instagram personality, with an estimated net worth of $3 million as of 2022. She is one of the nation’s growing social media stars. Jena became quite well-known by posting her original content on her accounts. Her YouTube channel and her YouTube endorsements, sponsorships, and ads generate the majority of her revenue.

How much is the worth of Jena Frumes?

Jena Frumes is an American fashion influencer, actress, model, YouTuber, TikToker, and Instagram personality, with an estimated net worth of $3 million as of 2022.

How much money does Jena Frumes make in a year?

How old is Jena Frumes?