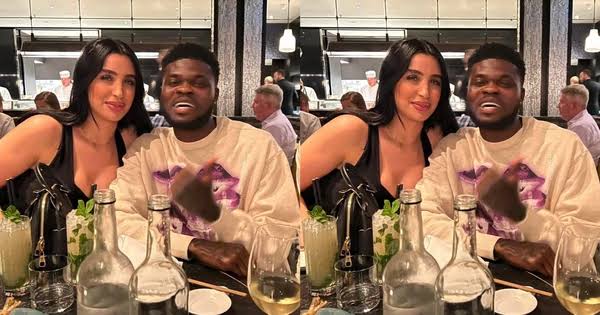 An unidentified lady has once again dragged Arsenal star Thomas Partey, to filth on social media over fresh Rape allegations with receipts.

Recall that earlier this month, Arsenal star, Thomas Partey had been reportedly accused of rape allegations by his wife, Sara Bella.

The shocking report suggested that Partey was left out of Arsenal’s pre-season schedule in Germany as he was dealing with personal issues.

The 29-year-old Ghanaian midfielder was reportedly being accused of rape by his Moroccan girlfriend Sara Bella for one of the most ridiculous reasons ever.

Partey’s Moroccan wife Sara Bella had reportedly accused the Arsenal star of rape after refusing to walk her down the aisle.

Eventually, the rumours died down with the Arsenal star rejoining his teammates in Germany for Arsenal’s pre-season.

However, Partey has once again made the rounds on social media after a Twitter user called him out over fresh rape allegations on Thursday evening, July 28.

According to her,Thomas Partey allegedly tried to forcefully have oral s*x with her while she was asleep. A bizarre gesture which she obviously didn’t take kindly.

‘He raped me, left me in bed unconscious then went out to party in Ibiza, came back, laughed in my face and told me I don’t get to say no to him’ she claimed.

According to the lady, she and Thomas Partey were dating and the Arsenal star had already met before the alleged incident in Ibiza.

@deffonotchaur also claims she tried to break things up with Partey, before he convinced her that he was going to change.

‘We were dating, he asked me to travel with him for his birthday after I tried to end things with him a few weeks prior. He convinced me that he had booked the trip for us and that he was going to change. I fell for it.’ she claimed.

@deffonotchaur also posted her chats with Partey on his official snapchat account via series of screen recordings.

The lady further reveals that the whole incident happened months ago, confirming she was also paid off to not disclose what she went through.

She finally reveals that the real reason she is speaking up is that, she’s yet to receive justice from the police whom she had reported the incident to months ago, despite being paid off.

It remains to be seen whether this latest allegation is true or false but as of Thursday night, Thomas Partey, is yet to respond to accusations levelled against him.

Arsenal on the other hand, could now be faced with dealing with another issue involving the public image of one of their star players.

According to a source close to the Arsenal midfielder via a series of tweets, it was revealed that Partey rejected a marriage proposal from his lover Sara Bella.

Things had been going smoothly for the pair but after he refused to walk her down the aisle, Sara reportedly tried to blackmail him by accusing him of rape.

The rape accusation was reported to the police and Partey a local chief in his country Ghana was picked up by the authorities.

This stunning development became a real twist in their fairytale as reports further emerged stating that Sara Bella’s social media status has been changed from “Married” to “Single,”

Thomas Partey was also believed to be in shock having spent about £.700,000 on the same person accused him of rape.

Partey previously converted his religion from Christianity to a Islam and also changed his name to YAKUBU all because of her Moroccan girlfriend who has allegedly accused him of rape.

From what we know so far, Sara Bella is a Moroccan model who has been rumored to be dating Arsenal midfielder Thomas Partey.

Sara Bella relocated to the United Kingdom to further her education. and most likely met the Ghanaian footballer during that period.

Meanwhile, not much detail is currently known about Partey’s alleged lover as of this moment asides from her Tik Tok account.

However, Partey was yet to make their relationship public before the allegations sprung up.

It’s also pertinent to know that Thomas Partey’s actual spouse Sara Bella is very different from the lady previously rumoured to be the instigator of the rape allegations.

This is the “innocent man” you arsenal fans were defending

this video was recorded from my fronds phone after his agent threatened me and told me they would say I made fake videos and manipulated the screenshots. pic.twitter.com/jfBzfHL24L

We were dating, he asked me to travel with him for his birthday after I tried to end things with him a few weeks prior.

He convinced me that he had booked the trip for us and that he was going to change. I fell for it. https://t.co/rVXGk5VO0q pic.twitter.com/0YOvPt4esn

Polaroids from the yacht trip including a selfie he took himself on the camera https://t.co/W5ICVh1q58 pic.twitter.com/eKHs8PgkUb