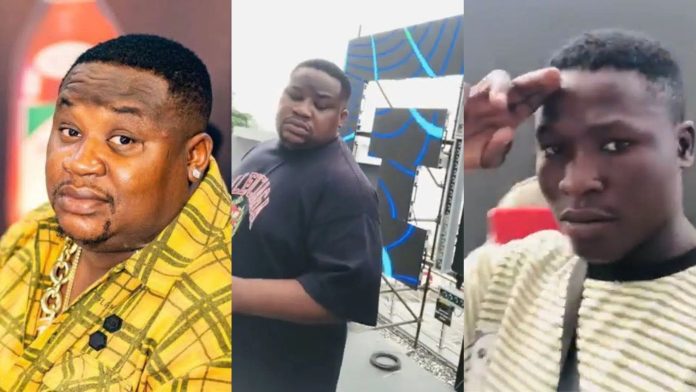 An offer of N1 million has been made to a young man by the name of Snazzy after a viral video of celebrity bartender Cubana Chief priest looking down on him went viral.

The man had criticized Cubana for his behavior as he sought to take a selfie video with the celebrity when they were both on stage preparing the location for an event.

After being dragged for his action, the businessman revealed that the fan is a worker who was hired to set up the venue for his Absolute Lifestyle Party.

He said Snazzy neglected his duty for frivolities and stressed that he should feel lucky that he only got an eye sizing-up.

However, a Twitter user named Swanky, who expressed sympathy towards the young man launched a search for him and said he wants to gift him N1m for how he handled the incident.

He wrote; ”Someone should get me this guy’s contact. After what Cubana Chief-Priest did to him, he handled it like a man. I have 1Million Naira for him.”

Someone should get me this guy’s contact. After what Cubana Chief-Priest did to him, he handled it like a man. I have 1Million Naira for him. pic.twitter.com/l6kMaOGKVH