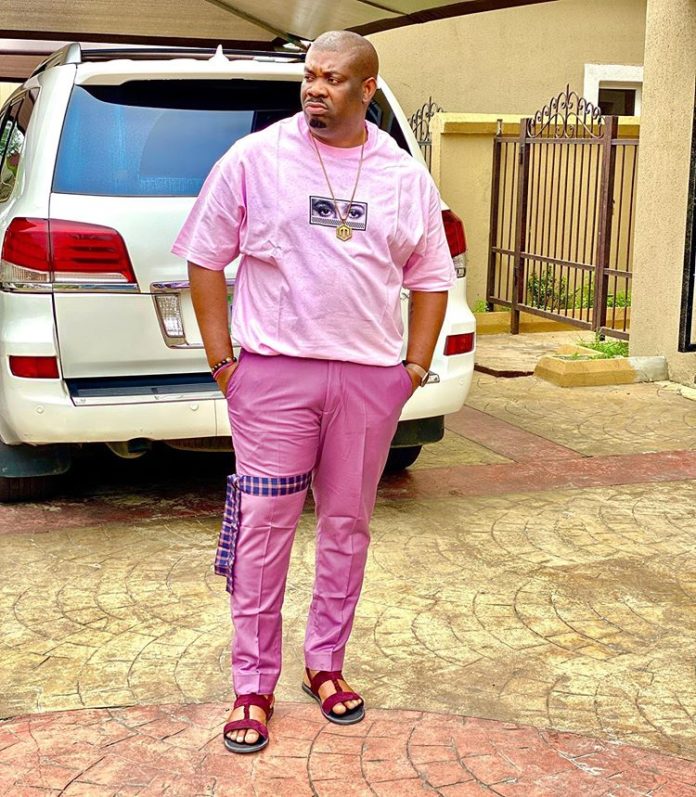 Nigeria’s richest music producer, Don Jazzy bought a new house, reportedly worth N300 million naira in Lekki, Lagos State, coupled with his numerous expensive cars, one can only wonder and ask what is Don Jazzy net worth in 2022?

In this article, you would find out more about his Biography, Career, Relationship, Cars and Houses.

Who is Don Jazzy?

Don Jazzy whose real name is Michael Collins Ajereh, was (born November 26, 1982) to Mr and Mrs Ajereh. Don Jazzy is an Indigene of Isoko Village in Delta State, Nigeria.

His mother is an Igbo Princess from Abia State, while his father originates from the Isoko. Don Jazzy was born and raised in Umuahia, Abia State. His family later moved to Ajegunle, Lagos where he was raised.

Career as a Music Producer and Artist

Michael Collins Ajereh(Don Jazzy) right from when he was 12 years old developed an interest in music and began to play the bass guitar. He also gained knowledge of traditional and percussion instruments.

In 2000, Ajereh visited London. His uncle had invited him to play the drums for the local church. In London, Ajereh gained employment at McDonald’s as a security guard. He continued his interest in music, associating with Solek, JJC, Kas, The 419 Squad, and D’Banj. Ajereh learned producing skills from Emeka Infiniti at O-Town record company.

In 2004, Ajereh collaborated with D’Banj to form Mo’ Hits Records. In the next two years, Ajereh produced the albums No Long Thing and Rundown/Funk You Up. A third album, Curriculum Vitae, had also been started. Around this time, Ajereh developed a recognizable introduction, “It’s Don Jazzy Again!”.

In 2008, Ajereh was credited with the production of The Entertainer by D’Banj. He also contributed to the production of Wande Coal’s Mushin 2 MoHits, an album that was described as one of the best albums to ever come out of Nigeria.

Although Ajereh did not take credit as a singer, he performed background vocals for artists he produced.

These performances include vocals for D’Banj, Sauce Kid, Dr SID, Ikechukwu, Kween, D’Prince, Jay-Z. Ajereh provided a vocal performance for Kanye West’s song Lift Off with Beyoncé on the Watch The Throne album.

In 2011, Ajereh was employed by Kanye West as a producer at Very Good Beatz. Ajereh worked with Jay-Z and Kanye West on the production of Lift Off, featuring Beyoncé on the album Watch The Throne which was released on 8 August 2011.

On 7 May 2012, Ajereh announced a new record label, Mavin Records. Ajereh said, “I see Mavin Records being the powerhouse of Music in Africa in the shortest possible time.”

In May 2012, he released an album featuring the artists signed to his label. The songs on the album included: Amarachi, Forever, Oma Ga, Take Banana and Chocolate, YOLO and the anthem I’m a MAVIN.

At the Headies Awards 2015, Ajereh argued with Olamide. The two disagreed about who should have won the “Next Rated” award. Lil Kesh of YBNL records lost to Reekado Banks, Ajereh’s artist. The winner of the award received a car. Apologies on both sides were posted afterwards.

Don Jazzy is still single but has been linked with many women in Nigeria and abroad.

In December 2020, Don Jazzy took to social media to reveal he was in search of a new girlfriend while hinting that his American Crush, Rihanna might be Pregnant.

The Mavin Record Label CEO, over the years, has not been married and those not have a wife that is known to the best knowledge of the Public.

But on April 3rd, 2021, Don Jazzy dropped a bombshell about his past marriage, according to him, he got married at 20 years old while in London to the love of his life and wife Michelle but got divorced 2 years later due to the fact that he was more in love with his music than his home as a married man. How I got married at 20 and divorced at 22 – Don Jazzy (Photo)

“For so long everyone keeps asking me when am I getting married? Well truth is almost 18 years ago I was 20 and I got married to my best friend Michelle @yarnstaswitch and it was beautiful. I loved love and I loved marriage. Michelle is soooo beautiful inside and outside with such a soft heart. But then me being so young and full of dreams I went and fucked it up cos I was giving all my time to my Music.

In September 2018, Don Jazzy revealed his mother had found him a wife, a moment after hugging his son tightly.

Photos from Don Jazzy and his ex-wife, Michelle’s wedding 18 years ago

On the 27th of February, 2021, Popular Nigerian music executive Don Baba J added another new achievement to his long list of milestones as he acquires a new house worth N300 million naira in Lagos State.

The multiple award-winning music executive took to his official Instagram account to share pictures of the new mansion which is located in Lekki, Lagos State. while sharing the pictures, wrote a note that reads: Added this new crib to the portfolio. Shhhhh my new neighbours are sleeping.

Man Like Don Jazzy with all his wealth and lifestyle is also a lover of exotic and luxurious cars, although he doesn’t flaunt them much on social media. Below are some of the exotic cars owned by Don Baba J.

Don Jazzy Instagram account has over 10.5 million followers, while his Twitter followers are currently on 5.1 million and counting,  making him one of the Top 10 most followed celebrities on social media in Nigeria.

Don Jazzy is currently the richest music producer and one of the most Influential artists in Nigeria with an estimated net worth of $20 million dollars as of 2022.

Don Jazzy and Wizkid who is the richest?

How much is Don Jazzy worth?

Don Jazzy is currently the richest music producer and one of the most Influential artists in Nigeria with an estimated net worth of $20 million dollars as of 2022.

what is don jazzy real name?

How old is Don Jazzy?