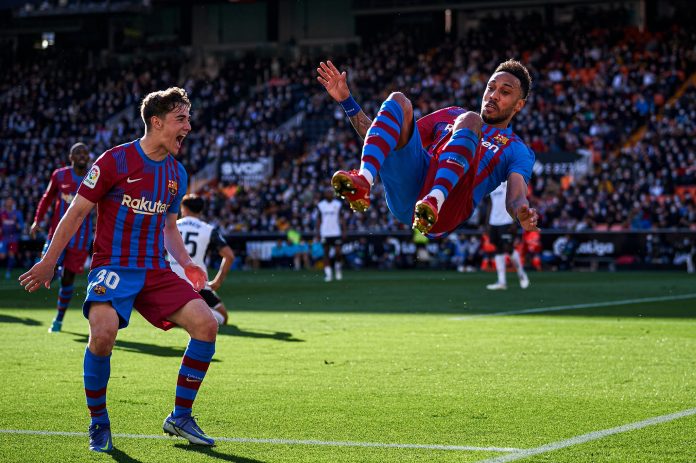 Pierre-Emerick Aubameyang netted his first goals for Barcelona as Xavi’s team moved back into LaLiga’s top four with a 4-1 thrashing of Valencia.

Aubameyang’s double and one from Frenkie de Jong gave the visitors a commanding half-time lead at the Mestalla, with the hosts having two goals ruled out before the break.

Carlos Soler pulled one back for Valencia, before Pedri’s superb strike added some gloss to the scoreline on the hour mark.

The victory moved the rejuvenated Catalan giants above Atletico Madrid into fourth place as they chase Champions League qualification.

After a scrappy start to the contest, Aubameyang netted his first goal for the Blaugrana on 22 minutes, racing onto Jordi Alba’s pass before hammering home at Giorgi Mamardashvili’s near post.

That setback stirred Valencia into life and they looked to have levelled when Marc-Andre ter Stegen palmed Jose Gaya’s cross into his own net, but the left-back was ruled offside by VAR.

An excellent Barcelona side doubled their advantage after half an hour as a flowing move ended with De Jong tapping home Ousmane Dembele’s cut-back.

Xavi’s men effectively ended the contest when Aubameyang bagged his second from Gavi’s cross after another brilliant move, before Valencia saw another goal ruled at the end of a frantic first half, Soler volleying in after the ball had gone out of play.

VAR intervened once again straight after the break, ruling Aubameyang offside when he thought he had won a penalty, before Soler netted a thumping header from Bryan Gil’s delivery.

But Valencia’s hopes of an unlikely comeback were dashed on the hour when substitute Pedri converted from long range, and the visitors withstood some late pressure to extend their strong run of form.

What does it mean? Xavi’s Barcelona revolution continues apace

Slowly but surely, the former World Cup-winning midfielder seems to be turning the Catalan giants around, and this victory extended their unbeaten run to nine LaLiga matches (five wins and four draws).

Barcelona have also netted 19 goals in their last nine league outings after blitzing Valencia at the Mestalla.

Aubameyang may not have left Arsenal on the best of terms, but he made his mark in Spain for the first time in Barcelona’s win.

The Gabon striker became the fourth man to have scored in each of LaLiga, the Premier League, the Bundesliga, and Ligue 1 this century, following in the footsteps of Stevan Jovetic, Michy Batshuayi, and James Rodriguez.

Valencia’s defeat was their third in succession against Barcelona in LaLiga, and the last time they experienced such a run against the Blaugrana came in 2011, under Unai Emery.

Furthermore, Barca have now lost on just one of their last 15 league visits to the Mestalla, winning seven and drawing seven of those matches.