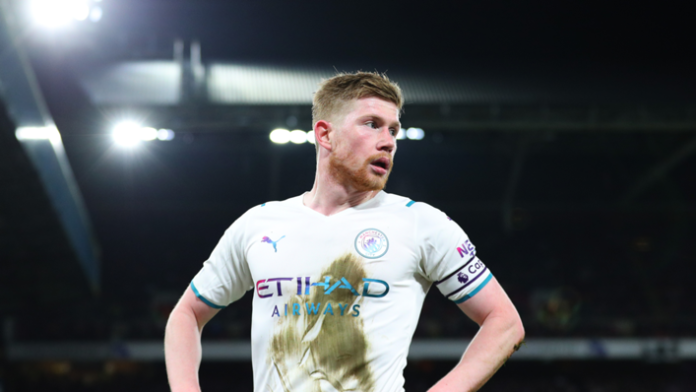 Manchester City failed to restore their six-point lead at the Premier League summit as they were held to a goalless draw at Crystal Palace on Monday.

Palace had been looking to complete a first league double over City since 1987-88 but settled simply for frustrating Pep Guardiola’s side, who went the closest to opening the scoring in the first half when Joao Cancelo rattled the woodwork.

Kevin De Bruyne was also denied by the frame of the goal after the interval, with no late winner forthcoming at Selhurst Park.

The stalemate meant City moved just four points clear of second-placed Liverpool, who have a game in hand and are yet to play the champions at the Etihad Stadium.

Michael Olise poked narrowly wide in the opening stages, while Bernardo Silva spurned a glorious chance after Vicente Guaita had spilled a De Bruyne strike at the other end.

De Bruyne then tested Guaita’s reactions with an audacious volley, before Cancelo cannoned against the left post with a thunderous long-range effort, with Aymeric Laporte squandering the inviting rebound inside the area.

Riyad Mahrez almost found the top-left corner with a left-footed curler, then De Bruyne struck the right post after the break with his low drive. Guaita tipped over from Mahrez on the follow-up, but a belated offside flag meant a breakthrough goal would not have stood.

Silva wasted another gilt-edged chance to nudge City ahead when he touched wide from Jack Grealish’s cross, while Laporte failed to make clean contact with a close-range header late on.

Conor Gallagher could even have stolen victory as his shot from a tight angle rose over Ederson’s goal in stoppage time.

What does it mean? City hand incentive to chasers Liverpool

With Liverpool playing Arsenal in their game in hand on Wednesday and then involved in the early kick-off when the league season resumes at the start of April, City could be second by the time they play again.

The crunch clash between the past two champions follows on April 10, with the coming month set to be pivotal in this title race. City, who had 18 attempts without scoring on Monday, must be more clinical in these key fixtures.

De Bruyne was typically influential in attack for City, picking up where he left off in the Manchester derby. The Belgium international created a game-high four chances, but his efforts were to no avail.

Silva has been described as the best player in the Premier League by Guardiola, but this display left much to be desired. The Portugal star squandered a pair of great chances, failing to hit the target with his only two attempts.

City visit Southampton in the FA Cup quarter-finals on Sunday, when Palace host Everton in the same competition.