Home Sports Football They extended my deal for a reason – Eddie Nketiah hits out... 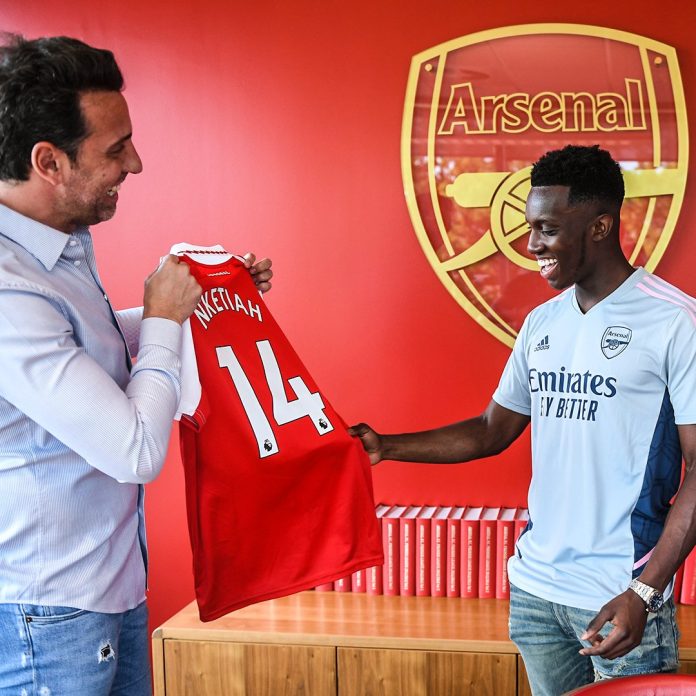 Days after agreeing to a new, long-term contract with Arsenal and assuming the legendary No. 14 jersey last worn by Thierry Henry, Eddie Nketiah has responded to his detractors.

Prior to signing a contract worth £100,000 per week with the Gunners until 2027, the 23-year-old striker was scheduled to become a free agent this summer.

Nketiah told The Telegraph, “When you get a run of eight games in the first team, you get that database and platform to show everything you can do.”

‘I have worked a lot with the manager on playing with my back to goal, on the spaces to drop into and link play.

‘Of course, it has been developed, but at the same time, you don’t get here by just standing in the penalty box and scoring a goal. ‘People are always going to say things, but I know what I can do. The people that have played with me, played against me, the coaches that have worked with me, I know how they feel about me.

‘Every team needs a squad to compete. The club is always looking for ways to strengthen. They have extended my deal and they have done so for a reason.’

‘Whoever comes in, you relish the challenge,’ Nketiah added. ‘You make them feel welcome, and then you fight and compete.’

Nketiah took the iconic No 14 shirt as part of his new deal, notably worn by Thierry Henry on his way to scoring 175 goals for Arsenal.

The number was available following Pierre-Emerick Aubameyang’s move to Barcelona in January, but Nketiah is keen to make it his own.

‘When the opportunity came up to take it, it was hard to say no. I know what it means to the club and the fans. It’s a nice feeling, an iconic number.

‘We know it is a special shirt and Thierry has made it cool to wear this shirt, just like he did with long socks and gloves. It is what we have grown up with.

‘I am just trying to be the best version of myself. I’m focused on creating my own memories in that shirt, leaving my own stamp on it.’