Multiple award-winning singer and songwriter Wizkid has shown why he’s being regarded as one of the best artists to have ever graced the entertainment industry as his hit single “Come Closer” gets certified platinum in Canada. 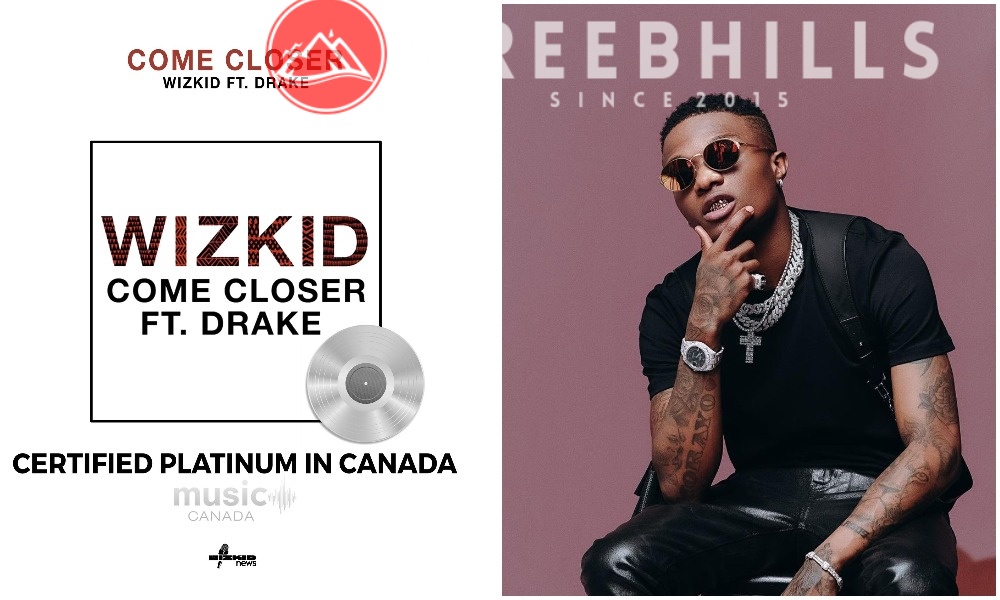 Wizkid released “Come Closer” on March 31 2017 and he made sure one of the greatest artists in the world were featured, Drake.

Drake and Wizkid gave fans the very best with their collaboration and it wasn’t surprising when fans and lovers of good music accepted the single on all streaming platforms.

The hit single won numerous awards and Wizkid has bagged another achievement with the single as it’s certified platinum in Canada.

READ ALSO
Afrobeat Superstar, Davido Shares How He Became Famous In The US

“Come Closer” has sales of over 80,000 units across the globe and this is Wizkid’s second song to go platinum or higher first as the lead.

This is the singers’ first certification of the year and fans will be proud of what he has been able to achieve with the single.

Wizkid will be hoping his latest album ‘Made In Lagos’ achieves more milestones due to the fact it has been breaking barriers on social media platforms ever since it was released some months ago.

This is Wizkid’s second song to go platinum or higher — first as lead.

Our first certification of the year! ? pic.twitter.com/3i2NM748Be

READ ALSO
Once a gutter BOY!! Now rolling with omo baba olowo – Zlatan Ibile says as Snaps with Davido and His Dad

Violette - July 1, 2020 0
Hushpuppi the Dubai big boy is back in the headline again. And this time around is about some of his properties that he hold in...

Violette - December 30, 2019 0
Nigeria dancehall singer and songwriter, Patrick Nnaemeka Okorie, popularly known as Patoranking continue to show how much love he has for his adorable daughter. Patoranking...

Twitter influencer, Biyi react as his ex-girlfriend, Sabena, shows off her pregnancy

Violette - October 20, 2021 0
Popular Nigerian Twitter Influencer, Biyi Nifemi has reacted to the latest reports of his former girlfriend, Sabena, who is now pregnant. It would be recalled...

Violette - November 11, 2019 0
Popular Nigeria music producer, Sess has leave the status of the 'Single' men as he ties the knot with his long time fiancee, Feyisara. Sess...