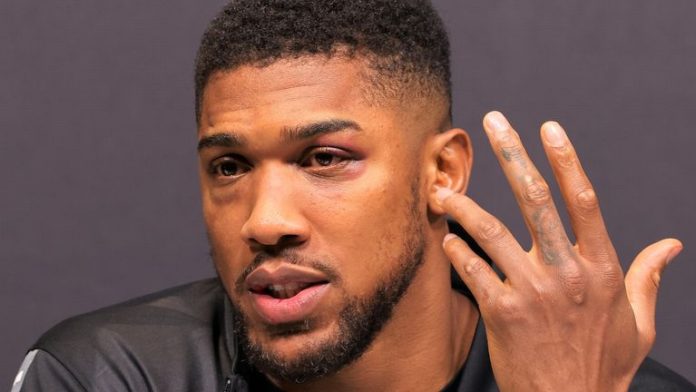 British-Nigerian boxer, Anthony Joshua has spoken for the first time since his last fight against Usyk on Saturday night with saw the Ukrainian snatching Joshua’s unified world titles and dethroning him in London.

Anthony Joshua suffered severe injuries from the fight and also lost some of his rankings on top magazines after he was defeated by Oleksandr Usyk, who showed his great speed, movement, and accuracy on Saturday.

Joshua has now spoken on the defeat in a new post on his Instagram page today. He said he watched the fight and he has seen his mistakes and learned from them. He revealed he would be using his new lessons to prepare against future encounters.

In other news, Evicted BBNaija season six housemate, Queen has finally reunited with her mother after her adventure at the ongoing reality show and it was a heartwarming moment. (Watch Video Here).

Also, Davido disclosed how he got into trouble and left the country for supporting the #EndSARS campaign. (Read Here).

Violette - September 22, 2021 0
The 73rd Primetime Emmy Awards was held on Sunday night at L.A. Live’s Event Deck, instead of the Microsoft Theater which has been home...

Violette - October 16, 2021 0
Singer 2face’s first babymama, Pero, has opened up on the brouhaha making the rounds in recent times on social media. (Read Details Here). In an...

Johnson Olumide - February 17, 2020 0
X-Men director Bryan Singer shared a snap of himself with the 2 co-stars (and former lovers) via Instagram on Thursday, May 21. And whereas...

Johnson Olumide - April 18, 2018 0
Big Brother Naija housemate,Cee-C has told Alex her former love interest,Tobi is a f-kboy who has nothing to offer a grown a*s woman like...