Home Sports “This is difficult for me” – Messi breaks down in tears as... 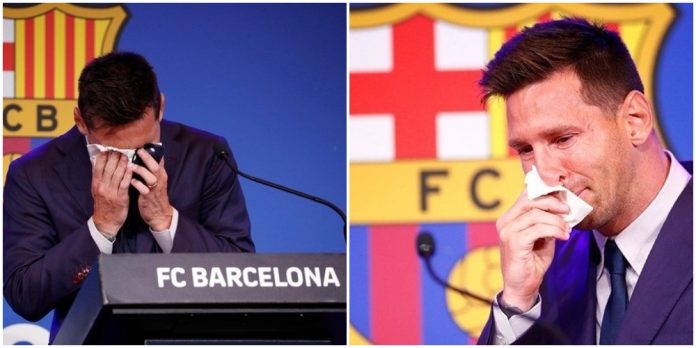 Lionel Messi broke down in tears as he confirmed his departure from Barcelona after 21 years at the club in a press conference on today.

The Argentina International, 34,  has been a free agent since July 1 when his contract at Camp Nou expired, though he had verbally agreed on a new deal on reduced wages only for the Catalan club to pull the plug.

Barcelona confirmed on Thursday, August 5, that Messi would not sign a new contract with the Spanish club amid financial concerns “and structural obstacles” which prevented Messi from renewing. (Read Details Here).

Speaking at a press conference from Camp Nou, which was attended by the entire first-team squad past  players – including Xavi and Carles Puyol, he said he was keen to continue at Barcelona and did ‘everything he could’ to stay but it was not possible.

‘I don’t know what to say here,’ he began. ‘These recent days I’ve been thinking, giving lots of thought to what I could say, and the truth is that I can’t think of anything. This is really difficult for me after so many years being here my entire life.

‘We always made this our home, we were at home, and we thought we would be staying here in Barcelona. The time we’ve had here in the city has been amazing. But wow, today I have to say goodbye to all of this.

‘I’m been here so many years, my entire life, since I was 13. After 21 years I’m leaving with my wife, with my three little

Catalan-Argentine kids and I can’t tell you everything we’ve lived in this city and I can’t say that in a few years we won’t come back, because this is our home and I promised my children that.

‘I’m just really grateful for everything, all my teammates, all my former teammates.

Johnson Olumide - April 24, 2018 0
One of our goals for Miss Global Ambassador Nigeria 2018 Contestants is to push each of them to the Point of Super Confidence, Making...

Johnson Olumide - September 28, 2018 0
The All Progressives Congress (APC) has declined to clear the Minister of Communication, Adebayo Shittu, for its governorship primaries. Shittu, who is interested in becoming...