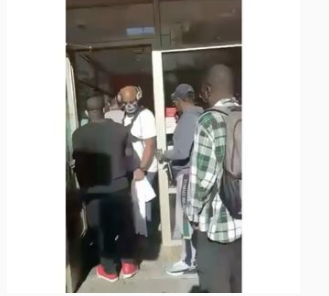 A man has expressed his worries in a video he released in which he made claims that homeless people in New York were assembled and paid to stage rallies in support of President Buhari’s government.

The video surfaced on Instagram days after news platform, SaharaReporters published a similar allegation stating that “Pro-government Nigerian protesters who countered groups agitating for self-determination in New York, the United States on Monday were paid $50 per hour.”

In the new video that surfaced, the man who recorded the footage can be heard alleging that protesters were promised $50 for one hour and $150 for three hours to be at the venue of the protest and to show support for the President Muhammadu Buhari regime despite the glaring failures.

In other news, Singer Oritse Femi was involved in a car accident while traveling along Saapade, Ogun State. (Read Here).

While in BBNaija, Angel confronted Cross after she asked him to come eat her P*ssy and he turned her down, she reacted by saying “You offered to eat my pu-cee in the bathroom”(watch the video here).