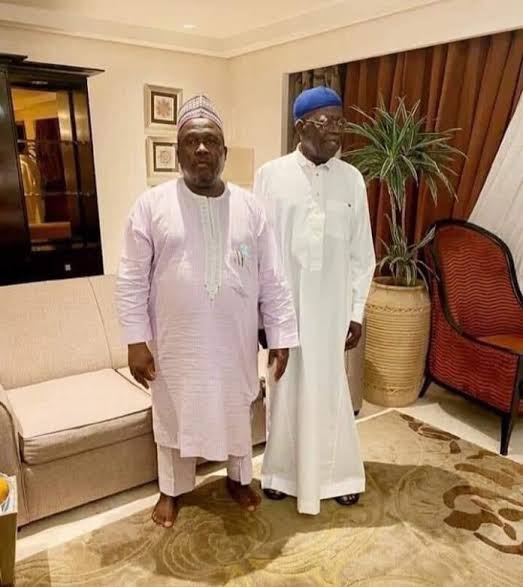 All appears not to be too well within the ranks of the ruling All Progressives Congress (APC) over the final choice of the party for an acceptable running mate to its Presidential Candidate, Asiwaju Bola Ahmed Tinubu.

This is due to the emergence of several camps within the APC said to be jostling for the position of running mate to the former Lagos State governor.

Sources within the party told Saturday Telegraph that Tinubu might consider making the stand-in candidate, Alhaji Ibrahim Masari, as his final choice to run with him at next year’s presidential poll.

A native of Katsina, Masari is a former National Welfare Secretary of the APC during the time of the Comrade Adams Oshiomhole- led National Working Committee of the party.

Another outlet who is close to Tinubu told our correspondent that Tinubu’s choice of Masar came as a form of securing the support and buy-in of President Muhammadu Buhari to the Presidential aspiration of the National Leader of the APC next year.

“I can tell you that there is tension within the party (APC) over the choice of the running mate to the presidential candidate, Asiwaju Bola Tinubu. I can confirm that to you,” the source who pleaded not to be mentioned, said. According to the source, numerous camps have emerged all jostling for the slot now because of the window that the APC has to substitute Masari’s name with another person. “Camps have emerged and all of them are doing all within their power to ensure that they clinch the slot,” the source said, adding that a series of meetings have been taking place within and outside Abuja, the nation’s capital.

He (the source) added that no fewer than four Northern governors elected are in the race to pair up with Tinubu and that they (the governors) are lobbying and deploying their foot soldiers with a view to achieving their aim. According to the source, three of the governors are from the North West and one from the North Central, adding that three former governors as well serving top government officials are also in contention for the slot.

The source added that the heat generated by the fierce contestation from gladiators in the party prompted Tinubu to issue a statement via his media office last weekend to say that he has submitted the name of his preferred choice to the Independent National Electoral Commission (INEC). “As stipulated by the electoral law and Independent National Electoral Commission guidelines and timetable, the standard bearer of the All Progressives Congress, HE Asíwájú Bola Ahmed Tinubu, has returned his duly completed nomination forms to INEC. The forms were returned on Wednesday June 15, two days ahead of schedule.

“We wish to reiterate that HE Asíwájú Tinubu stands ready to contest the February 25, 2023 presidential election to deliver progressive good governance to our people,” the statement read in part. Confirming the development that Tinubu might stick to the choice in a telephone chat with our correspondent during the week, one of the aides of the former governor stated that “With the way things stand today, Asiwaju will be left with no other choice than to stick with his choice of Masari.”

Providing insight on why his principal decided to pick Masari, the source said, “It is simply to curry the support of President Muhammadu Buhari and nothing more,” adding that the move has paid off.

The source cited the rapprochement between Buhari and Tinubu as an indication that Masari seems likely to become the final choice of the party.

While Buhari has recently openly stated that the former Lagos governor was his preferred candidate, Tinubu on the other hand has praised the Daura- born leader for his neutrality during the presidential primaries of the party last month.